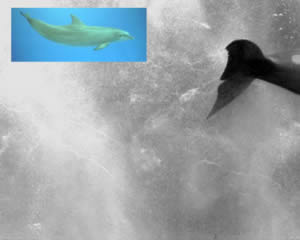 A single frame from a research video tracking the flow of water around Primo, a retired U.S. Navy bottlenose dolphin. 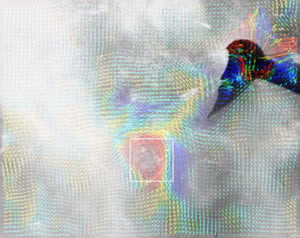 TROY, New York -- There was something peculiar about dolphins that stumped prolific British zoologist Sir James Gray in 1936.

He had observed the sea mammals swimming at a swift rate of more than 20 miles per hour, but his studies had concluded that the muscles of dolphins simply weren’t strong enough to support those kinds of speeds. The conundrum came to be known as “Gray’s Paradox.”

For decades the puzzle prompted much attention, speculation, and conjecture in the scientific community. But now, armed with cutting-edge flow measurement technology, researchers at Rensselaer Polytechnic Institute have tackled the problem and conclusively solved Gray’s Paradox.

“Sir Gray was certainly on to something, and it took nearly 75 years for technology to bring us to the point where we could get at the heart of his paradox,” said Timothy Wei, professor and acting dean of Rensselaer’s School of Engineering, who led the project. “But now, for the first time, I think we can safely say the puzzle is solved. The short answer is that dolphins are simply much stronger than Gray or many other people ever imagined.”

After studying dolphins, Gray said in 1936 that they are not capable of producing enough thrust, or power-induced acceleration, to overcome the drag created as the mammal sped forward through the water. This drag should prevent dolphins from attaining significant speed, but simple observation proved otherwise — a paradox. In the absence of a sound explanation, Gray theorized that dolphin skin must have special drag-reducing properties.

More than 70 years later, Wei has developed a tool that conclusively measures the force a dolphin generates with its tail.

Wei videotaped two bottlenose dolphins, Primo and Puka, as they swam through a section of water populated with hundreds of thousands of tiny air bubbles. He then used sophisticated computer software to track the movement of the bubbles. The color-coded results show the speed and in what direction the water is flowing around and behind the dolphin, which allowed researchers to calculate precisely how mush force the dolphin was producing.

Wei also used this technique to film dolphins as they were doing tail-stands, a trick where the dolphins “walk” on water by holding most of their bodies vertical above the water while supporting themselves with short, powerful thrusts of their tails.

The results show that dolphins produce on average about 200 pounds of force when flapping their tail — about 10 times more force than Gray originally hypothesized.

“It turns out that the answer to Gray’s Paradox had nothing to do with the dolphins’ skin,” Wei said. “Dolphins can certainly produce enough force to overcome drag. The scientific community has known this for a while, but this is the first time anyone has been able to actually quantitatively measure the force and say, for certain, the paradox is solved.”

At peak performance, the dolphins produced between 300 and 400 pounds of force. Human Olympic swimmers, by comparison, peak at about 60 to 70 pounds of force, Wei said. He knows this for a fact because he has been working with U.S.A. Swimming over the past few years to use these same bubble-tracking DPIV and force-measuring techniques to better understand how elite swimmers interact with the water, and improve lap times.

“It was actually a natural extension to go from swimmers to dolphins,” said Wei, whose research ranges from aeronautical and hydrodynamic flow of vehicles to more biological topics dealing with the flow of cells and fluid in the human body.

Wei said the research team will likely continue to investigate the flow dynamics and force generation of other marine animals, which could yield new insight into how different species have evolved as a result of their swimming proficiency.