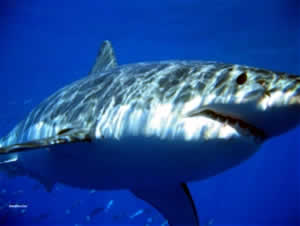 A team of divers off Isla Guadalupe recently captured footage of a great white shark attacking an elephant seal.

Adventure seekers hoping to encounter Great White sharks on a recent vacation got more than they bargained for last week when a 15 foot white shark explosively attacked a seal right in front of astonished divers.

"We were in the middle of cage diving operations on the back deck of the MV Islander when all of a sudden a 6 foot geyser of black foam and red blood erupted 50 yards from our position. I immediately deployed the shark research team from CICIMAR with video cameras and they caught a rarely seen white shark feeding event and repeated attacks on a 7 foot long resident Elephant Seal (Mirounga angustirostris)."

"The attacks lasted about 15 minutes and having witnessed a 'full on' predation first hand I have a new appreciation for the whites we encounter here. After four years of personal observations with these animals it's always good to be reminded of the power of this top ocean predator", said Australian born Luke Tipple, dive operations manager for Shark Diver and host of upcoming television series Wild Side Encounters.

"In 6 years of operations at this unique dive site, there have only been two recorded surface shark attacks on seals, this one was nothing short of spectacular. Today we decided to release this video to the general public", added eco-adventurer and Shark Diver CEO Patric Douglas after reviewing the video.

"We have research data showing these sharks actively stalking the smaller Guadalupe Fur Seals (pups and adults) early in the shark season," says Douglas. "By November these pups are quite big and begin to play offshore, which is the equivalent of ringing the dinner bell for larger female whites who need to consume mass quantities of food to fuel up for the winter and for breeding season."

Located 210 miles off the coast of Mexico, Isla Guadalupe has become the worldwide recognized dive destination for an unprecedented number of Great White sharks (Carcharodon carcharias) and provides exceptional opportunities for divers seeking encounters with these misunderstood denizens of the deep.

The Shark Diver crew, lead by dedicated shark specialists in conjunction with U.C Davis and CICIMAR's research teams, documented this rare attack on the surface and from below and will be studying it in depth in the coming months.

For more information on Shark Diver and attack video: http://www.youtube.com/watch?v=ahsvA1TpIvk