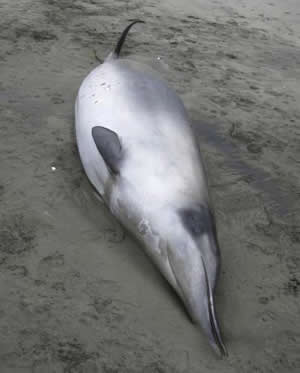 When two oexceedingly rare spade-toothed whales washed up on a New Zealand shore, they were initially mistaken for Gray's beaked whale (pictured)

A whale that is almost unknown to science has been seen for the first time after two individuals‚Ä"a mother and her male calf‚Ä"were stranded and died on a New Zealand beach. A report in the November 6th issue of Current Biology, a Cell Press publication, offers the first complete description of the spade-toothed beaked whale (Mesoplodon traversii), a species previously known only from a few bones.

The discovery is the first evidence that this whale is still with us and serves as a reminder of just how little we still know about life in the ocean, the researchers say. The findings also highlight the importance of DNA typing and reference collections for the identification of rare species.

"This is the first time this species‚Ä"a whale over five meters in length‚Ä"has ever been seen as a complete specimen, and we were lucky enough to find two of them," says Rochelle Constantine of the University of Auckland. "Up until now, all we have known about the spade-toothed beaked whale was from three partial skulls collected from New Zealand and Chile over a 140-year period. It is remarkable that we know almost nothing about such a large mammal."

The two whales were discovered in December 2010, when they live-stranded and subsequently died on Opape Beach, New Zealand. The New Zealand Department of Conservation was called to the scene, where they photographed the animals and collected measurements and tissue samples.

The whales were initially identified not as spade-toothed beaked whales but as much more common Gray's beaked whales. Their true identity came to light only following DNA analysis, which is done routinely as part of a 20-year program to collect data on the 13 species of beaked whales found in New Zealand waters.

"When these specimens came to our lab, we extracted the DNA as we usually do for samples like these, and we were very surprised to find that they were spade-toothed beaked whales," Constantine says. "We ran the samples a few times to make sure before we told everyone."

The researchers say they really have no idea why the whales have remained so elusive.

"It may be that they are simply an offshore species that lives and dies in the deep ocean waters and only rarely wash ashore," Constantine says. "New Zealand is surrounded by massive oceans. There is a lot of marine life that remains unknown to us."