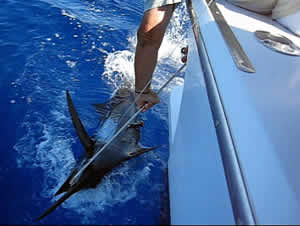 A freshly tagged Pacific blue marlin is about to have the hook slipped from its mouth so it can slip back into the sea. Credit Standford University 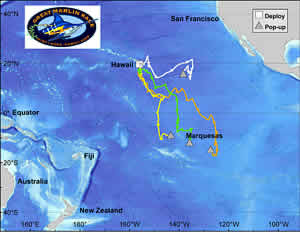 PALO ALTO, California -- Pacific blue marlin, one of the largest billfish to swim the open ocean, have begun giving up some secrets about their heretofore mysterious ways. New data has surfaced about the marlins' underwater journeys, thanks to "catch and release" anglers participating in the Hawaiian International Billfish Tournament. They have been helping Stanford researchers with tagging the great fish between the catching and the releasing.

The anglers and researchers tagged 10 marlins with electronic tags during this year's tournament off the Kona coast of the Big Island of Hawaii in August, setting off the Great Marlin Race. For 120 days, the tags will record where the marlins travel, how deep they dive and what water temperatures they encounter.

When the tags pop off, they will float to the surface and transmit their data back to the laboratory. If last year's results are any indication, the data should be interesting. The winner will be the fish that swims the farthest.

"In 2009, we got some of the longest tracks that have ever been recorded on marlin using the electronic tags," said marine biologist Randy Kochevar of Stanford's Hopkins Marine Station. "Three of these marlins swam all the way from Hawaii across the equator to the Marquesas Islands, which was something that we really hadn't anticipated." That is a journey of about 3,000 kilometers (over 1,850 miles).

Kochevar said it is very unusual for marine animals to migrate across the equatorial region, due to the combination of high-temperature surface water and oxygen-poor water just below. "The equatorial region is such a significant boundary for so many species, it was really surprising to see that three long tracks went right across it," he said.

"The Great Marlin Race is unique in that it combines the thrill of competitive angling with the excitement of cutting-edge conservation research," Kochevar said. "By involving charter boat captains and crews and tournament anglers directly in the research, we can learn a lot more and get a lot more people excited about the work we are doing."

Two of this year's tags already have popped off the fish, sooner than the researchers would have liked. But that is part of the transoceanic tagging and tracking game.

"This is part of the challenge of tagging fish," says Barbara Block, the Charles and Elizabeth Prothro Professor in Marine Sciences, who leads the research team. "You have to put out a lot of tags to get back enough data to work with."

Block, who pioneered the use of electronic tags on fish at the tournament in the mid-1980s, has done extensive tagging studies since then and is completing the 10-year Tagging of Pacific Predators (TOPP) program, in which over 4,300 electronic tags were deployed on 23 species of open ocean animals in the North Pacific.

In the early days of electronic tagging, the technology was not highly developed, which could make interpretation of unusual results difficult. In the 1980s, one of the tags from a marlin was found floating near the Galapagos Islands, Kochevar said.

"No one believed it popped off a marlin that had swum all the way down there," he said. "They thought the tag must have just popped off and drifted freely."

But based on last year's results, Kochevar said, the idea of a marlin swimming that far seems a lot more plausible.

The idea for the Great Marlin Race began when the organizers of the Hawaiian International Billfish Tournament approached Block with the idea of a special tagging program to accompany their 50th anniversary celebrations. Anglers were given the opportunity to sponsor electronic tags to be deployed on marlins caught and released during the tournament.

The organizers of the billfish tournament offered to provide free entry into the following year's tournament for the team whose tag surfaces the farthest from where it was initially deployed.

Although the Great Marlin Race involves a competition among the sponsors, gathering more data on marlins is the main focus.

"We don't really know a lot about the marlins' patterns and their behavior," Kochevar said.

"It appears that rather than traveling to a particular place to spawn, and then spending the rest of the year feeding, like tuna, it seems like they are constantly spawning and they sort of come and go from place to place," he said.

"What we hope to learn from this work," said Stanford marine biologist George Shillinger, "is basic information about these animals' life histories. We want to know where they go to feed and where they go to breed. We want to understand how they use the ocean in which they live and, ultimately, how we can manage their populations to ensure that they remain plentiful."

Updates will be posted regularly on the Great Marlin Race website, which also showcases the results of the 2009 race.

"Our hope," Kochevar said, "is that we can also work with other sport fishing tournaments to create their own Great Race programs."

For more information about the Great Marlin Race, or to participate as an angler or a sponsor, please contact Kochevar.

Block is a senior fellow at Stanford's Woods Institute for the Environment.