Researchers: Jellyfish Linked To Large-scale Ocean Mixing; 'Like A Human Swimming Through Honey' 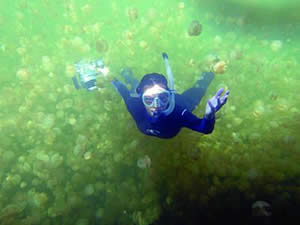 This is an image of a diver in aggregation of Mastigias sp. jellyfish in Jellyfish Lake, Palau. Credit: Monty Graham. 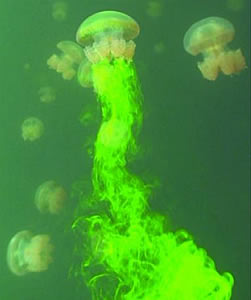 PASADENA, California -- Using a combination of theoretical modeling, energy calculations, and field observations, researchers from the California Institute of Technology (Caltech) have for the first time described a mechanism that explains how some of the ocean's tiniest swimming animals can have a huge impact on large-scale ocean mixing.

Their findings are being published in the July 30 issue of the journal Nature.

"We've been studying swimming animals for quite some time," says John Dabiri, a Caltech assistant professor of aeronautics and bioengineering who, along with Caltech graduate student Kakani Katija, discovered the new mechanism. "The perspective we usually take is that of how the ocean—by its currents, temperature, and chemistry—is affecting the animals. But there have been increasing suggestions that the inverse is also important—how the animals themselves, via swimming, might impact the ocean environment."

Specifically, Dabiri says, scientists have increasingly been thinking about how and whether the animals in the ocean might play a role in larger-scale ocean mixing, the process by which various layers of water interact with one another to distribute heat, nutrients, and gasses throughout the oceans.

Dabiri notes that oceanographers have previously dismissed the idea that animals might have a significant effect on ocean mixing, saying that the viscosity of water would damp out any turbulence created, especially by small planktonic animals. "They said that there was no mechanism by which these animals could impact large-scale ocean mixing," he notes.

But Dabiri and Katija thought there might be a mechanism that had been overlooked—a mechanism they call Darwinian mixing, because it was first discovered and described by Charles Darwin. (No, not that Darwin; his grandson.)

"Darwin's grandson discovered a mechanism for mixing similar in principle to the idea of drafting in aerodynamics," Dabiri explains. "In this mechanism, an individual organism literally drags the surrounding water with it as it goes."

Using this idea as their basis, Dabiri and Katija did some mathematical simulations of what might happen if you had many small animals all moving at more or less the same time, in the same direction. After all, each day, billions of tiny krill and copepods migrate hundreds of meters from the depths of the ocean toward the surface. Darwin's mechanism would suggest that they drag some of the colder, heavier bottom water up with them toward the warmer, lighter water at the top. This would create instability, and eventually, the water would flip, mixing itself as it went.

What the Caltech researchers also found was that the water's viscosity enhances Darwin's mechanism and that the effects are magnified when you're dealing with such minuscule creatures as krill and copepods. "It's like a human swimming through honey," Dabiri explains. "What happens is that even more fluid ends up being carried up with a copepod, relatively speaking, than would be carried up by a whale."

"This research is truly reflective of the type of exciting, without-boundaries research at which Caltech engineering professors excel—in this case a deep analysis of the movement of fluid surrounding tiny ocean creatures leading to completely revelatory insights on possible mechanisms of global ocean mixing," says Ares Rosakis, chair of the Division of Engineering and Applied Science at Caltech.

To verify the findings from their simulations, Katija and collaborators Monty Graham (from the Dauphin Island Sea Laboratory), Jack Costello (from Providence College), and Mike Dawson (from the University of California, Merced) traveled to the island of Palau, where they studied this animal-led transport of water--otherwise known as induced drift--among jellyfish, which are the focus of much of Dabiri's work.

Katija's jellyfish experiments involved putting fluorescent dye in the water in front of the sea creatures, and then watching what happened to that dye—or, to be more specific, to the water that took up the dye—as the jellyfish swam. And, indeed, rather than being left behind the jellyfish—or being dissipated in turbulent eddies—the dye travelled right along with the swimming creatures, following them for long distances.

These findings verified that, yes, swimming animals are capable of carrying bottom water with them as they migrate upward, and that movement indeed creates an inversion that results in ocean mixing. But what the findings didn't address was just how much of an impact this type of ocean mixing—performed by impossibly tiny sea creatures—could have on a large scale.

After a series of calculations, Dabiri and Katija were able to estimate the impact of this so-called biogenic ocean mixing. And, Dabiri says, it's quite a significant impact.

"There are enough of these animals in the ocean," he notes, "that, on the whole, the global power input from this process is as much as a trillion watts of energy—comparable to that of wind forcing and tidal forcing."

In other words, the amount of power that copepods and krill put into ocean mixing is on the same scale as that of winds and tides, and thus their impact is expected to be on a similar scale as well.

And while these numbers are just estimates, Dabiri says, they are likely to be conservative estimates, having been "based on the fluid transport induced by individual animals swimming in isolation." In the ocean, these individual contributions to fluid transport may actually interact with one another, and amplify how far the ocean waters can be pulled upward.

In addition, says Dabiri, they have yet to consider the effects of such things as fecal pellets and marine snow (falling organic debris), which no doubt pull surface water with them as they drift downward. "This may have an impact on carbon sequestration on the ocean floor," says Dabiri. "It's something we need to look at in the future."

Dabiri says the next major question to answer is how these effects can be incorporated into computer models of the global ocean circulation. Such models are important for simulations of global climate-change scenarios.