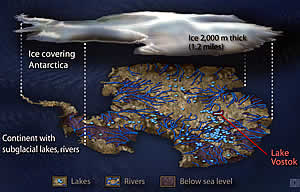 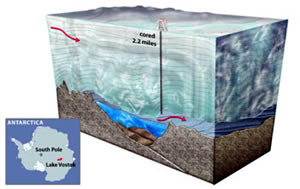 COLLEGE STATION, Texas -- The discovery of interconnected lakes beneath kilometers of ice in Antarctica could be one of the most important scientific finds in recent years, but proper procedures need to be established before investigation begins, says a Texas A&M University scientist who is a leader in the research efforts.

Mahlon “Chuck” Kennicutt II, professor of oceanography and director of the Sustainable Development Program in Texas A&M’s Office of the Vice President for Research, says the National Science Foundation and 11 countries involved in the research and exploration are seeking agreement on how best to study these unique environments, which include at least 145 lakes under Antarctica’s massive ice sheets. Several of the lakes are immense, and one, Lake Vostok, is similar in size to Lake Ontario, roughly 5,400 square miles, scientists note.

Participants in the project known as The Russian Antarctic Expedition have announced their intentions to penetrate Lake Vostok during the coming Antarctic field season.

“These lakes were rediscovered within the past 10 years or so, but no one yet has penetrated them and we want to make sure that the research is done properly and adheres to the highest environmental stewardship principles,” says Kennicutt, who also serves as a director of the SALE (Subglacial Antarctic Lake Environments) office, which is maintained at Texas A&M.

“This has the potential to be one of the most important scientific discoveries in years, since sub-ice water appears to be an important player in many different processes fundamental to Antarctica and our planet.

“We believe that these lakes are part of an interconnected system that spans the entire Antarctic continent,” he adds. “These bodies of water are several miles beneath the ice sheet which took millions of years to form, meaning these lakes have been undisturbed and disconnected from our atmosphere for hundreds of thousands of years. It is highly likely that unique microbial communities that we never knew existed are lake residents.”

A group of scientists, including Kennicutt, who also serves as an adviser to the National Science Foundation, the agency that funds and oversees all U.S. science in Antarctica, will meet in Big Sky, Mont., this week to discuss research procedures for studying sub-ice environments. The meeting closely follows the release of a report by the National Academies on environmental issues related to sub-ice exploration that provides guidance for future lake penetration.

Scientists from the countries involved, which include the U.S., France, Italy, Japan, Russia, the United Kingdom and others, have concluded that lake entry and sampling will ultimately be necessary to accomplish the ambitious research objectives, Kennicutt notes.

“How to do this in the best way to preserve these environments and to be least invasive is a key question that needs further discussion,” he notes.

“The countries involved have all agreed we must do as much as possible to avoid altering the lakes or causing any environmental damage.”

Research in Antarctica has always had a special set of rules among nations.

It is the only continent on Earth that is managed through an international treaty signed by 45 countries representing two-thirds of the world’s population. By unanimous consent of these nations, Antarctica has been viewed as a continent for science, research and peace.

The Department of State coordinates U.S. policy on Antarctica and works closely with the National Science Foundation, which administers and manages the U.S. Antarctic Program. Kennicutt also assists the NSF’s Office of Polar Program.

“We are probably 3-5 years away from conducting U.S. research on these underground lakes,” Kennicutt believes.

“We believe these lakes may exert important controls on large ice sheet movement and that they are just like above-groundwater systems and include a range of features such as streams, rivers and lakes, only they are under kilometers of ice. Once the U.S. becomes fully engaged in these research efforts, this will almost certainly be one of the dominant Antarctic research focus areas for at least the next decade, if not longer.”