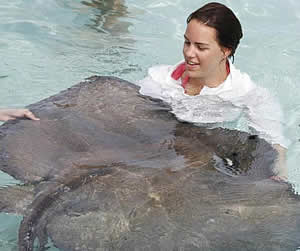 The Cayman Islands -- Marine wildlife artist and conservationist Dr. Guy Harvey is leading a petition drive calling on the government of the Cayman Islands to immediately put the National Conservation Law into effect, ensuring the safety and protection of all stingrays in the country's territorial waters.

Currently, stingrays are only protected in the country's designated Wildlife Interaction Zones, Stingray City and the Sandbar, two of the island's best known tourist attractions. Dr. Harvey said that outside of the zones there is no protection for stingrays and they can be removed and/or caught and eaten by local residents.

The National Conservation Act would close this loophole.

Recently four stingrays tagged for study were found at a local Dolphin Discovery facility and returned after a national outcry. However, six other untagged stingrays remain in captivity at the dolphinarium.

"The wellbeing of stingrays affects every single person in the Cayman Islands," said Dr. Harvey, who pointed out that half a million visitors per year from around the world come to swim and interact with these charismatic animals. "By signing this petition you are speaking out against the unconscionable acts of harming stingrays, especially when taking them out of their natural habitat."

Time is critical, according to Dr. Harvey, a marine biologist, who calls The Cayman Islands home.

To review and sign the petition, please go to: http://www.thepetitionsite.com/611/940/070/protect-and-keep-stingrays-in-their-natural-habitat/

"Maintaining the ecological health of these stingray populations for the long-term will require management and conservation programs based on a thorough knowledge of the biology of these animals," said Dr. Harvey who initiated research work on the Cayman Island's southern stingray (Dasyatis americana) population in 2012.

Dr. Harvey said the situation at the Sandbar in North Sound is unique, with a large number of wild rays that are not fenced or contained and inhabit the shallow clear water with accessibility every day of the year. The socio-economic value of the rays to the Cayman economy is enormous. Each animal may generate USD 500,000 in revenue per year and in its lifetime, assuming they live more than 20 years, may generate USD 10,000,000 in a lifetime.

From 2010, tour operators and casual observations indicated a sudden decline in the number of rays at the Sandbar. The Guy Harvey Research Institute (GHRI) based at Nova Southeastern University conducted a census in January 2012 and sampled only 61rays in the standard three -day research period at the Sandbar which represents a significant (38%) decrease in number of rays compared to the last census in 2008.

This summer GHRI returned with the support of the Georgia Aquarium veterinary staff. Over three days the team sampled 57 rays (only 5 males) at the Sandbar (down from 61 in January) with assistance from Department of Environment staff and several volunteers. The team spent a day at the original Stingray City and sampled 11 rays (2 males) and caught 3 rays (1 male) at Rum Point bringing the total to 71 rays sampled. The low number of males generally is cause for concern.

"These iconic animals have given so much to benefit the Cayman Islands that its time the Government returned the favor by immediately approving the National Conservation Law," said Dr. Harvey.