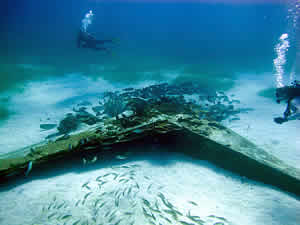 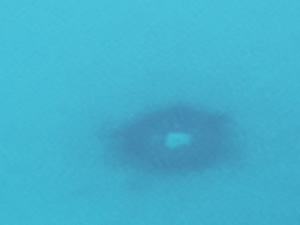 Mysterious doughnut shaped seagrass bed as seen from above

LANDOVER, Maryland -- Twenty five years ago, on December 4, 1986, Walter Wyatt's plane crashed in the waters of Cay Sal Bank, a remote area between Cuba and The Bahamas. It sank almost immediately.

Walter, who now lives in Enterprise, Alabama, spent a night in the ocean fending off sharks, plugging holes in his leaking life vest, and hoping for a merciful end. The Coast Guard located and saved him the next morning and his harrowing experience made many headlines.

Now, a quarter-century later, his sunken plane has played an important part in a discovery that may help scientists better understand coral reef ecosystems.

In April, 2011, researchers from the Global Reef Expedition, a project of the Khaled bin Sultan Living Oceans Foundation, stumbled upon Walter's submerged twin-engine plane. That discovery shed light on the mysterious formation of perfectly circular "meadows" of seagrass.

The Seagrass circles range in diameter from a few dozen meters to hundreds of meters. Some are solid circles and others have a 'doughnut hole' in the middle. They are important to the health of coral reefs, because they provide vital nursery habitat and feeding areas to many animal species that live in and around reefs. But their round shape has been baffling.

Scientists from the Global Reef Expedition, a multi year research program to study and preserve coral reefs around the world, discovered filled in sink holes under the solid seagrass circles. And, in every doughnut shaped seagrass circle they found a synthetic object, including Walter Wyatt's plane.

Research suggests that phosphorous leaching from the sinkholes acts like a fertilizer for the solid circular seagrass beds above. And, for the doughnut shaped seagrass beds another kind of fertilizer is at work.

Underwater observations made during reef surveys revealed that Walter Wyatt's plane is acting as an artificial reef, providing safe harbor for many fishes and marine invertebrates. This "fertilizer," the researchers believe, is the waste excreted by the animals that make the reefs home. To avoid predators, these creatures typically venture just a short distance from the safety of the reefs. As a result, they fertilize a relatively narrow ring around the 'reef' or object. It's in this circular ring where seagrass thrives.

The findings of the Global Reef Expedition will help the Bahamian government better manage Cay Sal Bank. That should lead to improved protection of the coral reefs that are such a vital part of ocean environment. That's good news for coral reefs in the western Atlantic Ocean, and for people everywhere.

Walter now feels that he benefited from his terrible misfortune. "It was a life-changing experience for me, and not entirely to the negative," he said. "For one thing, I found out I wasn't the only being in the world. I found out I was fragile."

As are coral reefs everywhere.

Science Without BordersÂ® is registered to the Foundation for financial sponsorship of marine conservation programs and scientific research and to promote public awareness of the need to preserve, protect and restore the world's oceans and aquatic resources.