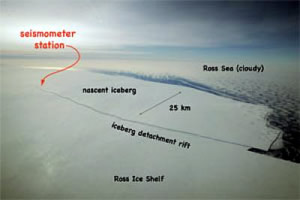 This is a view of Antarctica's Ross Ice Shelf and the deployment location of a seismometer. Credit: Joe Harrigan

SAN DIEGO, California -- Depicting a cause-and-effect scenario that spans thousands of miles, a scientist at Scripps Institution of Oceanography at the University of California - San Diego and his collaborators discovered that ocean waves originating along the Pacific coasts of North and South America impact Antarctic ice shelves and could play a role in their catastrophic collapse.

Peter Bromirski of Scripps Oceanography is the lead scientist in a new study published in the journal Geophysical Research Letters that describes how storms over the North Pacific Ocean may be transferring enough wave energy to destabilize Antarctic ice shelves. The California Department of Boating and Waterways and the National Science Foundation supported the study.

According to Bromirski, storm-driven ocean swells travel across the Pacific Ocean and break along the coastlines of North and South America, where they are transformed into very long-period ocean waves called "infragravity waves" that travel vast distances to Antarctica.

Bromirski, along with coauthors Olga Sergienko of Princeton University and Douglas MacAyeal of the University of Chicago, propose that the southbound travelling infragravity waves "may be a key mechanical agent that contributes to the production and/or expansion of the pre-existing crevasse fields on ice shelves," and that the infragravity waves also may provide the trigger necessary to initiate the collapse process.

The researchers used seismic data collected on the Ross Ice Shelf to identify signals generated by infragravity waves that originated along the Northern California and British Columbia coasts, and modeled how much stress an ice shelf suffers in response to infragravity wave impacts. Bromirski said only recently has technology advanced to allow scientists to deploy seismometers for the extended periods on the ice shelf needed to capture such signals.

The study found that each of the Wilkins Ice Shelf breakup events in 2008 coincided with the estimated arrival of infragravity waves. The authors note that such waves could affect ice shelf stability by opening crevasses, reducing ice integrity through fracturing and initiating a collapse. "[Infragravity waves] may produce ice-shelf fractures that enable abrupt disintegration of ice shelves that are also affected by strong surface melting," the authors note in the paper.

Whether increased infragravity wave frequency and energy induced by heightened storm intensity associated with climate change ultimately contribute to or trigger ice shelf collapse is an open question at this point, said Bromirski. More data from Antarctica are needed to make such a connection, he said.

In separate research published last year, Bromirski and Peter Gerstoft of Scripps Oceanography showed that infragravity waves along the West Coast also generate a curious "hum"--subsonic noise too low for humans to hear.