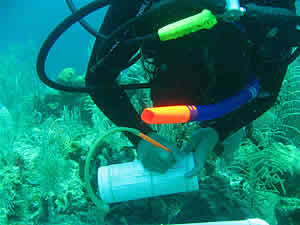 The findings, published in the Wednesday, Feb. 17, 2010, issue of the journal PLoS One, are the first comprehensive global study to gauge the impact of marine protected areas on the health of corals.

Such havens have proved successful in protecting fish, leading to optimism among researchers that they may also indirectly help corals by restoring reef-based food webs. Previous studies also suggested that such conservation zones can directly protect reefs from problems such as overfishing, anchor damage and sediment and nutrient runoff pollution from adjacent land.

Marine scientists Elizabeth Selig, Ph.D., and John Bruno, Ph.D., from the University of North Carolina at Chapel Hill, analyzed a global database of 8,534 live coral cover surveys conducted between 1969 and 2006. They compared changes in coral cover in 310 marine protected areas to those in nearby unprotected areas, looking at 4,456 reefs in 83 countries. Coral cover, or the percentage of the ocean floor covered by living coral tissue, is a key measure of the health of coral ecosystems.

“We found that, on average, coral cover in protected areas remained constant, but declined on unprotected reefs,” said Selig, the study’s lead author, who completed the work for her doctoral dissertation at UNC. She is now a researcher with Conservation International.

Bruno, associate professor of marine sciences in the UNC College of Arts and Sciences, said the results also suggest the protective benefits of such areas increase with time. Initially, coral cover continued to decrease after protections were put in place. However, several years later, rates of decline slowed and then stopped.

For example, in the Caribbean, coral cover declined for about 14 years after protection began – possibly due to the time it took for fisheries to rebound – but then stopped falling and began to increase. In the Indo-Pacific, cover kept declining for the first five years after protections were established, then began to improve, eventually reaching growth rates of two percent yearly after two decades.

“Given the time it takes to maximize these benefits, it makes sense to establish more marine protected areas. Authorities also need to strengthen efforts to enforce the rules in existing areas,” Bruno said.

The paper noted that the results may even be a conservative estimate of the benefits because regulations aimed at controlling fishing, poaching and other activities in many MPAs in the tropics are poorly enforced. In addition, most areas have only recently been established (almost 60 percent of the surveys in the analysis were from areas less than 15 years old).

“Although the year-to-year changes in coral cover may seem trivial over the short term, the cumulative effects could be substantial over several decades,” Selig said.

However, Selig and Bruno said it remains to be seen whether the observed benefits of MPAs are sufficient to offset coral losses from major disease outbreaks and bleaching events, both of which are predicted to increase due to climate change. That concern is backed by their finding that widespread warming events like the strong El Niño climatic event of 1998 drastically reduced the positive effects of protective zones. “Marine protected areas are clearly a key tool for coral reef conservation, but we will still have to focus on implementing policies that will reduce climate change,” they said.

The research was supported by funding from UNC, the Environmental Protection Agency and the National Science Foundation.