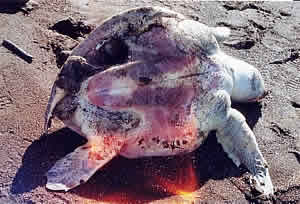 SAN JOSE, Costa Rica -- Shrimp exports to the United States will continue to be embargoed, according to Public Notice 7490 issued by the State Department last May 27, pursuant to section 609 Law 101-162, which imposes embargoes on shrimp from nations whose fleets do not protect sea turtles from drowning in shrimp trawl nets.

In contrast, 12 countries passed the certification: Colombia, Ecuador, El Salvador, Guatemala, Guyana, Honduras, Mexico, Nicaragua, Nigeria, PakistÃ¡n, PanamÃ¡, and Suriname. Shrimp from Belize will have free access to the United States as it prohibited shrimp trawling in its waters as of December 31st, 2010.

Costa Rican shrimp has suffered 4 embargoes since 1999. A shrimp embargo has been imposed on Costa Rica since May of 2009, over two years, and will continue for an indefinite time.

"The national shrimp trawl fleet has shown that they have no interest whatsoever in marine conservation nor sustainable fisheries," denounced Randall Arauz, President of the Costa Rican organization Pretoma. "They don't only kill turtles, they also target snappers and groupers, threatening sustainable artisanal fisheries", added Arauz.