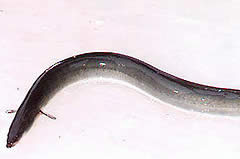 TOKYO, Japan -- An ancient mystery surrounding the Japanese eel, a species as prized by fishermen for its high price as it is by chefs for its delicate flesh, has been explained at last.

Like its Atlantic cousins, the Japanese eel (Anguilla japonica) matures in freshwater but then migrates out to sea to spawn -- but where this act is carried out has, until now, been an enigma.

The answer, says a Japanese ocean researcher, lies in a tiny triangle of the Pacific Ocean about 2,000 kilometres (1,200 miles) east of the Philippines, near underwater mountains west of the Mariana Islands.

There, male and female eels gather in the waning moonlight in the middle of the year, luxuriating in the balmy tropical waters.

Still in a microscopic larval state, the creatures could only be identified as being Japanese eels thanks to a DNA test.

Their spawning site was pinpointed as 14 degrees north, 142 degrees east, to the west of the Suruga seamount in the southern part of the West Mariana Ridge. The eels had hatched about four days before the new moon of June 2005.

The site is cleverly chosen, because it enables the hatchlings to be carried northwestward on the Kuroshio Current, which flows towards the coastline of China and Japan where the eels mature in rivers and lakes.

If the spawning were to occur only a little bit further south, the infant eels could get swept up in the Mindanao Current, which runs southwards down the eastern side of the Philippine archipelago.

The love grounds of the Japanese eel are tiny when compared to those of its two Atlantic relatives, the European and American eels (Anguilla anguilla and Anguilla rostrata), which reproduce in the Sargasso Sea in the eastern Caribbean.

The study appears on Thursday in Nature, the weekly British science journal.

Grilled, steamed, broiled and baked, the eel is a delicacy in Japan, where it is known as unagi.

Most of the eels sold for the food trade come from aquaculture. However, these eels themselves come from wild eels that were caught and put in fish farms in order to mature in captivity.

As a result of surging demand and disruption to its reproductive cycle, catches of this species have fallen by three-quarters in the past 30 years, according to figures of the UN's Food and Agricultural Organisation (FAO).

The price of Japanese eel has soared over the past decade, prompting importers to turn to cheaper European eels to meet demand.

In turn, this has encouraged dangerously unsustainable catches of European elvers, known as "glass eels" because they are transparent for the first few years of their life.