Phosphorus And Groundwater: Scientists Establish Links Between Agricultural Use And Transport To Streams 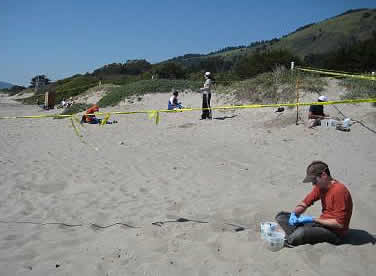 PALO ALTO, California -- Faulty septic systems have long been blamed for polluting some of California's most popular beaches. Yet few scientific studies have established a direct link between septic systems and coastal contamination.

Now, in the first study of its kind, Stanford University researchers have tracked a plume of polluted groundwater from a septic system to one of Northern California's top recreational beaches. The researchers say their findings could be an important step toward improving wastewater management in coastal communities throughout the United States.

"The flow of groundwater directly to the ocean is very hard to measure," said Alexandria Boehm, associate professor of civil and environmental engineering at Stanford. "We hope that this work will raise awareness of the importance of groundwater as a source of pollution, and that coastal communities will look at this source when considering conservation efforts."

Since 2008, Boehm and her Stanford colleagues have been studying the flow of groundwater from a large septic system at Stinson Beach, a favorite destination of swimmers and surfers about 20 miles north of San Francisco that's managed by the National Park Service. The study is supported by an Environmental Venture Projects grant from Stanford's Woods Institute for the Environment.

Stinson Beach is relatively clean compared to other California coastal sites, such as Malibu and Rincon Beach, where high levels of bacterial contamination have been blamed on failing septic systems. Efforts in these communities to make the costly switch to sewer-based plumbing have proved contentious.

At Stinson Beach, the Stanford team has worked closely with local and federal agencies to educate the public on the pros and cons of septic systems and develop a consensus on how to improve groundwater quality.

In septic systems, wastewater drains from toilets and sinks into an underground tank, then through porous pipes in a leach field, where surrounding sand filters out bacteria and other pathogens. Microbes in the dirt break down organic and inorganic wastes, such as nitrogen.

"In conventional septic systems, wastewater treatment tends to be inefficient for certain contaminants," said Nick de Sieyes, an engineering graduate student working with Boehm. "As a result, untreated sewage can end up polluting nearby groundwater."

Prior to this study, scientists had never observed in detail a plume of contaminated groundwater flowing from a septic system to the sea. To track groundwater pollution at Stinson Beach, the research team obtained a permit from the National Park Service to install a network of 120 monitoring wells near a large septic system close to a beach parking lot that collects wastewater from nearby homes and public toilets.

The wells were placed in parallel rows on the beach separating the septic system from the ocean â a distance of several hundred yards. This network of wells allowed researchers to collect groundwater samples and assess the degree of contamination flowing from the septic system, through the beach and out to sea.

The results were encouraging in one respect, de Sieyes said. Tests revealed low concentrations of fecal indicator bacteria - microbes that are used by health officials to evaluate water quality for beach closures.

"The septic system appeared to be treating fecal indicator bacteria to a relatively high degree, so the chance of triggering a water-quality advisory in the surf zone during our study was low," he said.

Although few microbes made it out of the leach field alive, the scientists discovered a plume of nitrogen-enriched groundwater flowing through the sand toward the ocean. Studies have shown that excess nitrogen can cause harmful blooms of phytoplankton and other algae that choke off oxygen in coastal waters.

"In the lab, we induced small phytoplankton blooms in ocean water by adding just a little bit of fresh groundwater from this site," de Sieyes explained. "In communities like Stinson Beach, whatever doesn't get treated in the beach is ultimately going to flow into the ocean," de Sieyes said.

"Because septic systems rely on naturally occurring bacteria in the ground to do the cleaning, they're much more energy efficient," he said.

But septic system technology hasn't evolved much since the 1950s, Boehm added, so new systems may have to be designed to treat wastewater to a higher degree before it is discharged to a leach field

"If there was a better, cheaper, more efficient onsite treatment technology, I'm sure the Stinson Beach community would be interested in it," de Sieyes said.

In addition to the National Park Service, the research team has presented its findings at public meetings and worked closely with the Stinson Beach County Water District. Even before the study began, the water district had taken big steps to green its shores, de Sieyes said, establishing eco-friendly rules for installing new septic systems, including restrictions on how close to shore they can be built.

"The local water district and the community as a whole deserve a great deal of credit for tackling this issue head-on," he said.

"Our results will provide valuable insight into the fate and transport of contaminants from septic systems along the California coastline and elsewhere," Boehm said. "Predicting where, when and what magnitude of environmental pollution can be expected will help guide regulators in deciding which coastal settings are appropriate for septic systems."