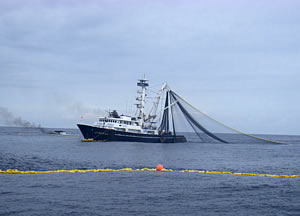 GARZA, Costa Rica -- A U.S. based world fisheries conservation association is demanding disciplinary action after the attack by a commercial Venezuelan tuna purse seining vessel and helicopter on a sportfishing boat off the coast of Costa Rica.

The incident has been reported and posted with photos on The Billfish Foundation's website www.billfish.org.

According to Carter the Silver-Rod-O was fishing around a school of spinner dolphin for yellowfin tuna and billfish, when the helicopter from La Rosa Mistica began circling the area.

"We were celebrating one of our guest's first-ever sailfish release, when the seiner veered from its course and headed directly toward our boat. The helicopter then began making passes over the anglers and as the seiner came closer and began setting its net, the helicopter started dropping incendiary devises around the Silver-Rod-O and the school of spinners."

"Several explosives landed within 50 meters of the boat. The purse seiner continued to power straight toward our boat," Carter said, "It was threatening to either encircle us in their net or to plow us into the sea unless we abandoned the school of dolphin. Rather than endanger our guests, we retreated and watched and listened as the La Rosa Mistica closed the net and its crew obnoxiously celebrated its victory."

TBF President Ellen Peel said, "This is the tenth vessel attacked off Costa Rica in the past two years. In June of 2008 nine vessels were similarly attacked in two incidents off of Quepos and Los Suenos. TBF has previously appealed to the Costa Rican Fisheries and Aquaculture Institute INCOPESCA (Instituto Costarricense de Pesca y Acuicultura) to take punitive action against these purse seine vessels, fishing in Costa Rican waters under Costa Rican licenses to no avail.

The purse seiner is owned by Ingopesca, S.A. and registered out of the port of Callao in Venezuela. It is not known if this is one of the 30 trawling vessels expropriated from private owners by Venezuela President Hugo Chavez's government in the spring of 2009 for use with setting up fish processing plants there.

Joan Vernon, TBF Board member and like Carter is a part-time resident of Costa Rica was outraged by the attack.

"The Costa Rican government has to do something to show these foreign seiners that this sort of behavior will not be tolerated before someone gets injured or killed out there," she said. "Already we are hearing reports of local captains arming themselves in case of more such incidents."

Costa Rica licenses many foreign purse seine vessels to fish in their national waters and land tuna to be processed in Costs Rica.

"It is ironic that another such assault has occurred just a few weeks before TBF formally presents the results of its study on the relative economic contribution of sports and commercial fishing in Costa Rica to government officials in San Jose," noted TBF scientist Dr. Russell Nelson, adding "We have documented that sports fishing tourism contributes more to the Costa Rican gross national economy than commercial fishing, adding over $599 million annually, and $138 million of that comes directly from folks like Gary Carter who maintain a vessel and crew in that nation."

Peel concluded, "If Costa Rica won't address this sort of outrage and also take better care of the marine resources like sailfish and marlin that drive this economic engine, they will find people moving elsewhere and taking their money with them."

She also noted within the past month another Central American nation issued a decree banning purse seining in its waters.

"In July, Panama's President Ricardo Martinelli issued an executive order prohibiting purse seine vessels from fishing within the nation's waters â a much wiser stance, one that allows commercial fishing beyond 200 miles and recreational fishing within the 200 mile zone."

TBF has been working with the numerous governments worldwide â some for over a decade â for the expansion of conservation measures and laws to protect billfish, mainly from overfishing coastal fisheries by commercial interests, while implementing tag and release programs for sportsmen.