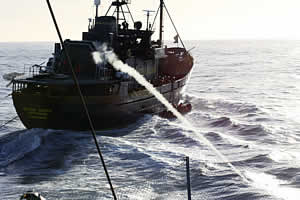 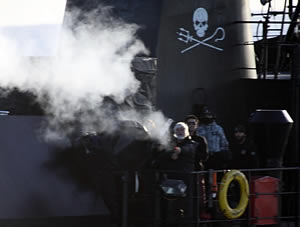 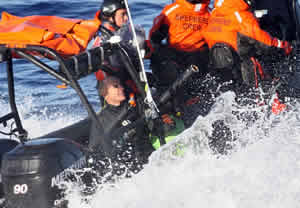 TOKYO, Japan -- Japanese research whalers in the Antarctic have accused the Sea Shepherd Conservation Society of injuring three sailors with acid from projectiles launched against the Shonan Maru No. 2.

Japan’s Antarctic whale research (JARPA II) vessels were subject from the February 11 evening to the 12 wee hours to yet another wire hawser and butyric acid attack by the Dutch-registered ship Steve Irwin and the Togolese ship Bob Barker. The Steve Irwin and the Bob Barker repeatedly deployed wire ropes and used a launcher to fire butyric-acid projectiles against the Japanese vessels.

The Dutch and Togolese ships have been pursuing the Nisshin Maru since February 6 and 8 respectively. Following a Greenpeace-style antics display on February 9, at about 16:50 February 11 the Steve Irwin approached the Nisshin Maru port side to near-miss distance while firing a water cannon.

The research vessel Shonan Maru No. 2 too was subject to attack by the Steve Irwin which deployed wire hawsers intended to entangle and disable its rudder and propeller while the Bob Barker repeatedly fired a high-power illegal laser weapon against the Japanese crew. The Bob Barker also came directly across the bow of the Nisshin Maru deploying wire hawsers intended to sabotage its rudder and propeller.

At about 23:00JST three of the Shonan Maru No. 2 sailors who were readying to prevent any activist illegal boarding became victims of the Sea Shepherd projectiles, receiving acid-splash chemical injury to their eyes and face.

The Dutch and Togolese ships continued for several hours their attack launching many butyric-acid projectiles and smoke bombs against the Nisshin Maru.

The Institute of Cetacean Research strongly condemns the Sea Shepherd Conservation Society dangerous and violent actions carried out in contempt of the International Whaling Commission consensus criticism and demand for self-restraint and against Japan’s whale research vessels and crews who are conducting perfectly legal research activities in the Antarctic.

The Institute of Cetacean Research urges again the Netherlands, the Steve Irwin’s flag state, Australia, the de facto home port country to the Steve Irwin, the Togolese Republic, the Bob Barker’s flag state, and all other related countries to take every means available to prevent the Sea Shepherd Conservation Society illegal and violent actions and strongly requests that these countries observe their international obligations and deal with the Sea Shepherd in a strict and objective manner.