Swimming With The Sharks: Interview With Vivian Toro, One Of Stuart Cove's Female Shark Feeders 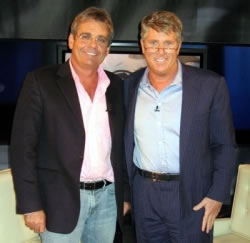 NEW YORK, New York -- hark Wrangler, Stuart Cove, was featured on CNBC’s TV show “The Big Idea With Donny Deutsch,” which aired on 4/19/07. Stuart Cove was interviewed on the show in part for his unique work on major Hollywood feature films involving sharks. Stuart Cove’s Dive Bahamas is one of the few places in the world where divers and snorkelers can interact in a safe manner with the ocean’s greatest predators, Sharks.

According to Stuart Cove, “Being on The Big Idea TV Show was a great experience. Mr. Deutsch is a dynamic personality, and I enjoyed the interview that took place in New York at CNBC’s studios.” The focus of the show was "Dangerous Jobs", and the interview discussed Stuart's experience working with sharks on the many feature films his company Stuart Cove’s Underwater Hollywood has been a part of in addition to his experiental knowledge of sharks and their behavior.

Mr. Deutsch and Stuart also discussed how a certified diver could dive with sharks, and even with proper training and experience, learn to feed and wrangle the sharks themselves. Videos of an actual Shark Dive at Stuart Cove’s Dive Bahamas, off Nassau, Bahamas was shown during the taping.

Mr. Cove continues, “We discussed several other Hollywood blockbuster film projects we have been fortunate to work on over the last few years, such as the recent James Bond Film “Casino Royale”, “Open Water”, “Into The Blue”, “After The Sunset”, and of course, every year for the last several years we have been featured on Discovery Channel's Shark Week.”

The Bahamas are unique for filming sharks, as the waters off Nassau offer filmmakers and tourist divers alike an amazing opportunity to dive close–up and personal with Sharks.