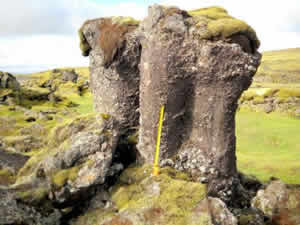 Researchers say pillars like these were formed when lava and water met on land without exploding. Credit: Tracy Gregg

BUFFALO, New York -- Rocky pillars dotting Iceland's Skaelingar valley were projectiles tossed into the fields by warring trolls. That, at least, is the tale that University at Buffalo geologist Tracy Gregg heard from a tour guide and local hiker when she visited the site on two occasions.

But Gregg and a colleague have a new explanation for the presence of the lava formations â this one also unexpected.

In the Journal of Volcanology and Geothermal Research, she and former UB master's student Kenneth Christle report that the pillars, hollow and made from basalt, likely formed in a surprising reaction where lava met water without any explosion occurring. Their findings appeared online Aug. 15 and will be published in a forthcoming print edition of the journal.

"Formations like the ones we see in Iceland are common in the ocean under two miles of water, where there's so much pressure that there's no explosion," she said. "They've never been described on land before, and it's important because it tells us that water and lava can come together on land and not explode. This has implications for the way we view volcanic risk."

Gregg and Christle propose that the same phenomenon sculpted the land-based lava pillars in Iceland.

It happened in the 1780s, when lava from a nearby eruption entered the Skaelingar valley, which Gregg theorizes was covered by a pond or was super-swampy. She thinks one reason no explosion occurred was because the lava was moving so slowly â centimeters per second â that it was able to react with the water in a "kinder, gentler" manner.

"If you're driving your car at 5 miles per hour and you hit a stop sign, it's a lot different than if you hit that same stop sign at 40 miles an hour," she said. "There's a lot more energy that will be released."

The Iceland formations, some over 2 meters tall, display telltale features that hint at how they were created. For example:

Each of these distinctive characteristics is also prevalent in deep-ocean pillars, said Gregg, who first saw the Icelandic formations in the mid-1990s while hiking in the valley with her husband.

"I knew as soon as I saw them what they were," she said. "I had, at that time, been on submarine cruises and seen these things deep under the sea, so I was just hysterical, saying, 'Look at these!' So I ran around and started taking pictures until the light started running out."

She didn't have the chance to return to the site until 2010, when Christle received a student research grant from the Geological Society of America to do field work in Iceland. The two spent four days studying the pillars in detail, confirming Gregg's original suspicions.

In the future, scientists could hunt for land-based lava pillars near oceans to learn about the height of ancient seas, or search for such formations on Mars and other planets to determine where water once existed.