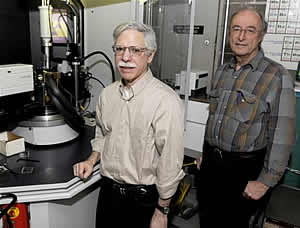 CHICAGO, Illinois -- Understanding how deep-sea floor rocks and sediments interact with surrounding fluids and gasses is difficult to access. But a device created by two University of Illinois at Chicago geoscientists will duplicate extreme sea floor conditions inside a small chamber and examine samples inside the chamber by X-rays under these harsh conditions.

"Instead of going down to the abyssal plain of the ocean floor, we're bringing it to the lab," said Stephen Guggenheim, professor of earth and environmental sciences at UIC.

Guggenheim and emeritus professor Gus Koster van Groos say their high-pressure environmental chamber can simulate deep-sea pressure to 1,000 atmospheres -- comparable to deeper parts of the ocean -- and at temperatures from zero to 200 degrees Celsius.

The two began earlier prototypes of their device about a decade ago, improving it by trying different technologies and using more durable metals for the pressure vessel. X-ray diffraction is used to determine the composition of the materials reacting in the chamber and to study the effect of the sea floor environment. An inline mixing pump keeps suspensions mixed and in equilibrium.

Guggenheim said it is the first device to successfully obtain X-ray data under such severe conditions.

"We'll be able to duplicate very precisely what happens on the ocean floor," said Koster van Groos. "We'll see minerals interaction with sea water and with gasses we can add, such as carbon dioxide or methane. And we can run experiments over longer terms, even for several months, to see what happens."

Guggenheim and Koster van Groos said their device may be used to study whether long-term, deep underground sequestering of excess carbon dioxide can be done safely. Carbon sequestration is under consideration as a way to combat global warming.

Guggenheim said engineers he's talked with say the device may be used for a variety of applications, such as examining the interaction between various materials and caustic acids.

"What's both unique and interesting is that you can look at the reaction while it's going on, without stopping or opening the containment vessel," he said.

Guggenheim and Koster van Groos hope their device will help scientists better understand such things as deep-sea mineral formation, clay mineralogy, mineral-brine interactions and what is going on in hydrothermal systems called black- and white-smokers.

The UIC scientists are also considering the study of organic material such as bacteria that can be introduced into their device after the injection valves are designed.

"We'd like to see how it changes the speed of reactions," said Guggenheim. "But ultimately, adding molecules from which organisms can develop might help us better understand how life evolved on the early earth."