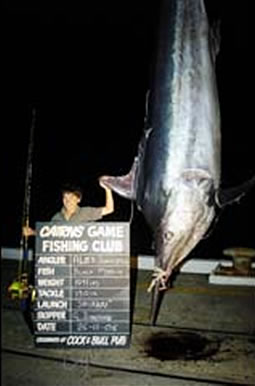 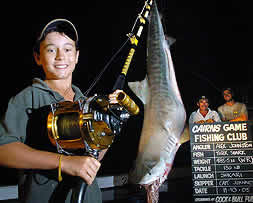 CAIRNS, Australia -- CAIRNS teenager Alex Johnston could barely walk after spending more than an hour battling to land this record 496kg black marlin. Yesterday, he and his proud dad Graham, skipper of the game boat Shikari, towed the majestic game fish back out to sea to watch it get ripped to pieces by sharks.

The 14-year-old said he was expecting some flak from "greenies" but "the last time six big tiger sharks came in . . . it was pretty cool".

Crowds flocked to Trinity Wharf for the weigh-in as news spread of the mammoth catch on Sunday.

"It looked huge underwater," he said.

"I knew it was a world record as soon as I saw it."

The 5m female black marlin topped the teen's own world record for the biggest catch of any fish for somebody under 17, set when he outfought a 485.5kg tiger shark.

"It is much more prestigious to catch a big marlin than a shark because they fight harder and take longer to get to the boat," explained the 15-time fishing world junior record holder. The black marlin was his first "grander", or thousand-pounder, the holy grail of big game fishing. It was his 97th marlin in total.

Critics yesterday condemned the killing of the giant fish as senseless trophy hunting.

"It is a shame we have not evolved beyond killing trophy fish," said Australian Marine Conservation Society spokesman Craig Bohm.

"He's a strong little bugger and he doesn't give up," he said.

"We put the dead marlin in front of the cage and then jump into the cage and watch the big sharks come in to feast on the carcass," he said.