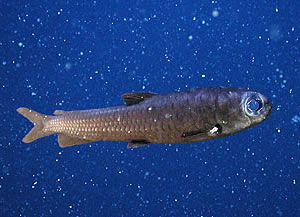 MONTEREY, California -- New calculations made by marine chemists from the Monterey Bay Aquarium Research Institute (MBARI) suggest that low-oxygen "dead zones" in the ocean could expand significantly over the next century. These predictions are based on the fact that, as more and more carbon dioxide dissolves from the atmosphere into the ocean, marine animals will need more oxygen to survive.

Concentrations of carbon dioxide are increasing rapidly in the Earth's atmosphere, primarily because of human activities. About one third of the carbon dioxide that humans produce by burning fossil fuels is being absorbed by the world's oceans, gradually causing seawater to become more acidic.

However, such "ocean acidification" is not the only way that carbon dioxide can harm marine animals. In a "Perspective" published today in the journal Science, Peter Brewer and Edward Peltzer combine published data on rising levels of carbon dioxide and declining levels of oxygen in the ocean in a set of new and thermodynamically rigorous calculations. They show that increases in carbon dioxide can make marine animals more susceptible to low concentrations of oxygen, and thus exacerbate the effects of low-oxygen "dead zones" in the ocean.

Brewer and Peltzer's calculations also show that the partial pressure of dissolved carbon dioxide gas (pCO2) in low-oxygen zones will rise much higher than previously thought. This could have significant consequences for marine life in these zones.

For over a decade, Brewer and Peltzer have been working with marine biologists to study the effects of carbon dioxide on marine organisms. High concentrations of carbon dioxide make it harder for marine animals to respire (to extract oxygen from seawater). This, in turn, makes it harder for these animals to find food, avoid predators, and reproduce. Low concentrations of oxygen can have similar effects.

Currently, deep-sea life is threatened by a combination of increasing carbon dioxide and decreasing oxygen concentrations. The amount of dissolved carbon dioxide is increasing because the oceans are taking up more and more carbon dioxide from the atmosphere. At the same time, ocean surface waters are warming and becoming more stable, which allows less oxygen to be carried from the surface down into the depths.

In trying to quantify the impacts of this "double whammy" on marine organisms, Brewer and Peltzer came up with the concept of a "respiration index." This index is based on the ratio of oxygen and carbon dioxide gas in a given sample of seawater. The lower the respiration index, the harder it is for marine animals to respire.

Brewer provides the following analogy, "Animals facing declining oxygen levels and rising CO2 levels will suffer in much the same way that humans in a damaged submarine would suffer, once the concentrations of these gasses reach critical levels. Our work helps define those critical levels for marine animals, and will enable the emerging risk to be quantified and mapped."

In the past, marine biologists have defined "dead zones" based solely on low concentrations of dissolved oxygen. Brewer and Peltzer hope that their respiration index will provide a more precise and quantitative way for oceanographers to identify such areas. Tracking changes in the respiration index could also help marine biologists understand and predict which ocean waters are at risk of becoming dead zones in the future.

To estimate such effects in the open ocean, the MBARI researchers calculated the respiration index at various ocean depths, for several different forecasted concentrations of atmospheric carbon dioxide. They found that the most severe effects would take place in what are known as "oxygen minimum zones." These are depths, typically 300 to 1,000 meters below the surface, where oxygen concentrations are already quite low in many parts of the world's oceans.

Previously, marine biologists have assumed that the effects of increasing carbon dioxide in the oceans would be greatest at the sea surface, where most of the gas enters the ocean. Such studies have predicted a doubling of pCO2 (from about 280 to 560 micro-atmospheres) at the sea surface over the next 100 years. Brewer and Peltzer's calculations suggest that the partial pressure of carbon dioxide will increase even faster in the deep oxygen minimum zones, with pCO2 increasing by 2.5 times, from 1,000 to about 2,500 micro-atmospheres.

Previous studies have indicated that such oxygen minimum zones may expand over the next century. Brewer and Peltzer's research suggests that the effects of this expansion will be even more severe than previously forecast.

According to coauthor Peltzer, "The bottom line is that we think it's important to look at both oxygen and carbon dioxide in the oceans, rather than just one or the other." The impact of these chemical changes may be minimal in well-oxygenated ocean areas, but as the authors point out in their paper, "We may anticipate a very large expansion of the oceanic dead zones."