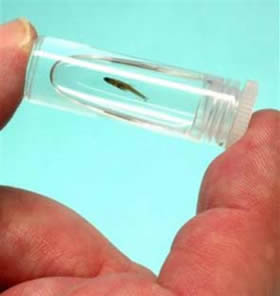 LONDON, England -- Scientists have discovered the world's smallest fish on record in an acidic peat swamp in Indonesia, with a see-through body and a head that is unprotected by a skeleton, researchers said Wednesday.

Mature females of the Paedocypris progenetica, a member of the carp family, only grow to 7.9 millimeters (0.31 inches) and the males have enlarged pelvic fins and exceptionally large muscles that may be used to grasp the females during copulation, researchers wrote in the Proceedings of the Royal Society, published Wednesday by the Royal Society in London.

"This is one of the strangest fish that I've seen in my whole career,' said Ralf Britz, zoologist at the Natural History Museum in London, who helped analyze the fish's skeleton. "It's tiny, it lives in acid and it has these bizarre grasping fins. I hope we'll have time to find out more about them before their habitat disappears completely."

The previous record for small size, according to the Natural History Museum in London, was held by an 8-millimeter species of Indo-Pacific goby.

The new fish was discovered on Sumatra island by fish experts Maurice Kottelat from Switzerland and Tan Heok Hui from the Raffles Museum of Biodiversity Research in Singapore. They were working with colleagues from Indonesia and with Kai-Erik Witte from the Max Planck Institute in Germany.

"You don't wake up in the morning and think today we will find the smallest fish in the world," Kottelat told The Associated Press in a telephone interview from his home in Switzerland.

He said the record of finding the world's smallest fish was not important, preferring to focus on what he said was "scientifically significant."

"What's important is finding a complete vertebrae in a body so small," he said.

Kottelat said he first came across the fish in 1996, but originally misidentified it as a member of an already existing species. "But then we realized this one was different."

According to the researchers, the fish live in dark, tea-colored water with an acidity of ph 3, at least 100 times more acidic than rainwater. Swamps like this were once thought to harbor very few animals, but recent research has revealed that they are highly diverse and home to many species that occur nowhere else.

Peat swamps are under threat in Indonesia from fires lit by plantation owners and farmers as well as unchecked development and farming. Several populations of Paedocypris have already been lost, researchers say, according to the Natural History Museum.