Chinese Chefs Divided Over Shark Fin Use Amid Reports of Species Decline; 'No Banquet is Complete without Shark Fin' 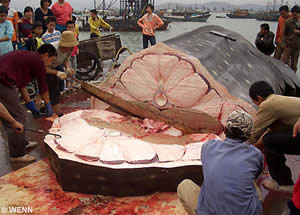 China -- It's no longer a secret how five loaves and two fish managed to feed the five thousand - especially if the sea-dwelling delicacies in question were as big as this mammoth fish.

More likely to eat than be eaten, this giant whale shark was caught off the coast of China by hardcore fishermen who managed to harness the ten-metre, eight-ton whopper.

Whale sharks are the world's largest living fish, it is estimated that they can reach an 18 metre length. They live in warm water along the coast and open seas and spend most of their time near the surface.

The prize whale shark's hefty load took over an hour to be hoisted in an industrial crane back on to dry land, where it was sliced into relatively smaller pieces for fish-lovers everywhere to enjoy.