This is a printer version of an UnderwaterTimes.com article.
To view the article online, visit: http://www.underwatertimes.com/news.php?article_id=97428531061 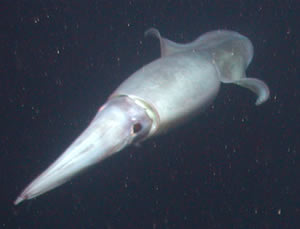 PALO ALTO, California -- In the last six years, California has seen a huge increase in the number of jumbo squid off the coast. Though there are several competing theories as to why this invasion has occurred, a Stanford biologist believes the jumbo squid are following the spread of a mid-depth layer of oxygen-poor water.

This oxygen-depleted layer barely receives the faintest traces of sunlight and is home to one of the most abundant groups of fish in the sea, lanternfish – glowing, 2–4 inch fishes with big eyes, a staple of the jumbo squid diet.

“There has been an expansion of the environment the squid like,” said Stanford biologist William Gilly, who has funding from the California Ocean Protection Council and California Sea Grant to study the squid’s influence on the California Current ecosystem. “The squid are spreading into this environment.”

“The low-oxygen domain has grown a lot in the Gulf of California over the last 50 years,” Gilly said, citing one piece of evidence for the theory.

More significantly, there is evidence that the oxygen-minimum layer is shoaling, becoming shallower, in the California Current, said NOAA oceanographer Steven Bograd, who has analyzed changes in dissolved oxygen concentrations in CalCOFI data.

“There has definitely been a pretty significant decline in dissolved oxygen content from 1984 to 2006,” Bograd said. “We see it pretty much at all depths.”

Off Monterey, the oxygen-minimum zone begins at about 500 meters depth and extends to about 1,000 meters. Bograd estimates that oxygen levels at 500 meters, the deepest the CalCOFI data goes, have dropped about 10–20 percent since 1984.

ROV surveys have shown that Monterey jumbo squid spend the bulk of their daytime hours at about 500 meters, the top of the oxygen-minimum layer, foraging. Similar behavior has been observed in the Gulf of California and is yet further evidence of the importance of the low-oxygen zone to these animals.

Some global warming scenarios predict a revved up microbial loop in the eastern Pacific Ocean, in which upwelling occurs in short 1–2 day bursts, said Stanford postdoctoral researcher Lou Zeidberg, explaining the link between climate and the squid. Under these conditions, surface algae tend to become food for microbes at depth. Less algae is consumed by zooplankton and small baitfish, which is why global warming could lead to lower fish production off California.

Because bacteria’s metabolic processes require oxygen, enhanced bacterial activity further reduces the oxygen content of water beneath the photic zone, where algae grow. In other words, the oxygen-minimum layer shoals, exactly what has been observed in CalCOFI data of the
California Current.

As the habitat for lanternfish grows, presumably so does their biomass, Gilly said. It is really the swelling biomass of lanternfish that explains the squid’s presence. Lanternfish comprise more than 400 species and are far more abundant than sardines or anchovies. Little is known about them, however, because they are not commercially exploited.

You can think of jumbo squid as one of the early winners of ocean climate change, Gilly said.

Others on the win list potentially include sperm whales, a jumbo squid predator whose numbers appear to have doubled off the West Coast in the last 15 years, said NOAA Fisheries biologist John Field, a collaborator on the project, who recently organized a CalCOFI symposium on jumbo squid.

In the absence of fishing pressure, some sharks could also be on the win list. In fact, Zeidberg believes that overfishing of sharks, and to a lesser extent tunas, both of which normally keep the squid’s numbers in check, has probably contributed to the jumbo squid’s population boom.

In the last decade, jumbo squid landings off Mexico, Central America and South America have soared from less than 200,000 metric tons to more than 700,000 metric tons. In this period, the northern boundary of the squid’s range has shifted from central Baja California to British Columbia – a staggering territorial expansion.

Some researchers speculate that California’s jumbo squid, which first appeared in droves following the 1997-98 El NiÃ±o, are the spillover from Mexico’s population boom.

Gilly and colleagues, however, recently have seen a female jumbo squid off Monterey with sperm packets around her beak, proof she mated. They have also found a jumbo squid egg mass in the Gulf of California, the first ever found in nature.

Jumbo squid, which are also known as Humboldt squid, may no longer be transient visitors; they could be reproducing here, Gilly said.

One of the goals of the project is to look for squid hatchlings off Monterey. The smallest jumbo squid found to date off California has only been 10–15 centimeters long. “We want to find squid babies,” to prove that the squid are completing their whole lifecycle in the region, Zeidberg said.

Another major goal of the project is to estimate the squid’s biomass in the California Current, which stretches along the entire U.S. West Coast, and to document the squid’s feeding behavior – to provide managers with ball-park numbers of the squid’s impact on species of management concern such as hake, market squid and rockfishes.

“We have no direct evidence the squid is impacting fisheries,” Field said. But, it is reasonable to assume they could–or are. Adult jumbo squid off California can weigh 30 kilos. The animals reach this super-size in about a year.

“You have a new predator on the block that is pretty awesome,” Gilly said. “They have huge energy requirements and they are starting to eat things that people care about.”