This is a printer version of an UnderwaterTimes.com article.
To view the article online, visit: http://www.underwatertimes.com/news.php?article_id=97325486100 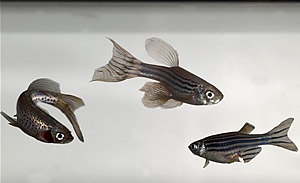 Zebra fish that were cloned in the MSU Cellular Reprogramming Laboratory. 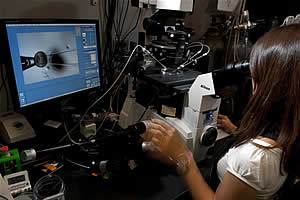 EAST LANSING, Michigan -- A team of Michigan State University researchers has developed a new, more efficient way of cloning zebra fish, a breakthrough that could have implications for human health research.

The work of the MSU researchers, detailed in the recent issue of the journal Nature Methods, is important because zebra fish, small striped fish common to many aquariums, are quickly becoming the animal of choice for many researchers.

“After the mouse, it is the most commonly used vertebrate in genetic studies,” said Jose Cibelli, an MSU professor of animal science and one of the paper’s co-authors. “It is used in cancer research and cardiovascular research because they have many of the same genes we have.”

For more than 20 years, Cibelli said, zebra fish have also served as an excellent model for understanding normal development and birth defects. More recently, research with zebra fish has extended to model human diseases and to analyze the formation and functions of cell populations within organs.

Previous methods of cloning zebra fish have had very low success rates. But using this new method, the number of cloned fish that can be obtained from an adult fin cell or an embryonic tail clip increased by 2 percent to 13 percent respectively.

The normal cloning technique uses an unfertilized egg and a donor cell. The DNA is removed from the egg and replaced by the DNA taken from the donor. The egg cell is then coaxed into dividing. The resulting fish is an exact genetic copy of the donor.

Using Cibelli and colleagues’ technique, the egg is gently removed from the female zebra fish and placed in a solution of ovarian fluid from a Chinook salmon.

“This worked well,” he said, “because it kept the egg inactive for some time. It gave us two or three hours to work with.

“It was also useful that we are working in Michigan. The state’s Department of Natural Resources was very generous in helping us collect fluid from female Chinooks.”

Then, borrowing a technique from human in vitro fertilization, the DNA was removed from the egg by using a laser.

Next, Cibelli’s team devised a novel, more efficient way of transplanting the donor cells into the egg.

“The tricky part was finding a way to get into the egg,” he said. “We used the same entrance that sperm uses. There was only one spot on the egg, and we had to find it.”

What makes zebra fish so useful in research is their eggs are transparent and the fish’s development is easy to follow.

Improving on the techniques of zebra fish cloning also is important because currently only the mouse remains the best model for gene targeting.

“So far the mouse is the only one from which you can delete genes in a reliable fashion,” Cibelli said. “What researchers do is mutate a gene, abolish its function completely, and then study the consequences.”

Other authors include Patrick Venta, an associate professor of microbiology and molecular genetics, and C.C. Chang, a professor of pediatrics and human development.