This is a printer version of an UnderwaterTimes.com article.
To view the article online, visit: http://www.underwatertimes.com/news.php?article_id=96850731024 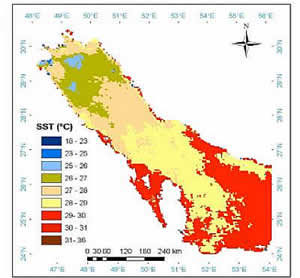 This image show that the temperature increases generally towards the coastline.

SOUTHAMPTON, U.K. -- Since 1985, seawater temperature in Kuwait Bay, northern Arabian Gulf, has increased on average 0.6Â°C per decade. This is about three times faster than the global average rate reported by the Intergovernmental Panel on Climate Change (IPCC). Differences are due to regional and local effects. Increased temperatures are having profound effects on key habitats and on power generation the Arabian Gulf.

Researcher Dr Thamer Al-Rashidi of the National Oceanography Centre, Southampton, said: "Because the waters of Kuwait Bay are well mixed by the tides, measurements of sea surface temperature can be used to assess temperature trends over time in the bay as a whole."

He and his colleagues used data on sea surface temperature (1985-2007) remotely sensed by a number of polar orbiting satellites to assess warming in Kuwait Bay and the Gulf region.

The data were 'ground truthed' by direct measurements of sea surface temperature in the region, and are in accord with air temperature trends recorded at Kuwait airport, and verify trends found in satellite data.

They found that the sea surface temperature of Kuwait Bay increased over the period at an average rate of around 0.62Â°C per decade, with an uncertainty of plus or minus 0.01Â°C. This is about three times the rate of average global increase estimated by the IPCC.

The increase was greatest in the early summer and least during winter months. The length of summertime increased almost twice as fast as peak summertime temperature. In 1998 and 2003, the monthly measurements of sea surface temperature showed unusually high peaks in summer temperature coincident with El NiÃ±o events – periodic warming of the atmosphere and ocean affecting weather in many parts of the world.

Temperature dipped in 1991, in the aftermath of the Iraqi invasion of Kuwait. "Dense smoke from the burning of oil fields hung over the region blocking out the sun, and we believe that this atmospheric dimming caused the relatively low summertime temperature peak recorded that year," said Dr Al-Rashidi, himself an officer in the Kuwaiti Navy. However, temperature then increased fairly steadily between 1992 and 2004.

"What all of this tells us," says Dr Al-Rashidi, "is that the global trends reported by the IPCC may not be representative locally."

The researchers estimate that about a third (0.2Â°C) of the observed decadal increase in seawater temperature in Kuwait Bay can be attributed to global climate change, while around 13 per cent of the increase (0.08Â°C) is due to human activity along the coast of the bay, especially the direct impacts of power and desalination plants.

The remaining 0.3Â°C (50 per cent) of decadal warming appears to be due to changes in regional drivers, including circulation and mixing of seawater in the Arabian Gulf, the influence of the dominant north-westerly wind (Shamal), freshwater discharge from the Euphrates and Tigris rivers, and sand storms.

Increased seawater temperatures are likely responsible, at least in part, for the reduction in dissolved oxygen causing summertime fish kills, and also for coral bleaching in the region. In general, the researchers warn that increased temperatures may lead to serious environmental degradation in the sensitive marine ecosystems of the Arabian Gulf.

Dr Al-Rashidi argues that regional warming could also have strategic implications: "Kuwait is dependent on desalination plants for its fresh water, and at temperatures over 37-38Â°C the turbines generating the electricity driving these plants have to be turned off," he said.

However, there have been distinct reductions in temperature since 2004 due to dust storms and their effect solar dimming. The frequency of dust storms has increased in recent years due to decreasing rainfall and increasing desertification. How this will interact with other local, regional and global factors to affect average temperatures in the long term remains uncertain.

"The lesson learnt is that temperature trends that we experience may be quite different from place to place due to variations in local and regional effects," said Dr Al-Rashidi.