This is a printer version of an UnderwaterTimes.com article.
To view the article online, visit: http://www.underwatertimes.com/news.php?article_id=96410273810 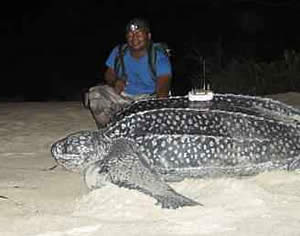 EXETER, UK -- The journeys of two marine turtles around the world's oceans will be available to view online this Christmas, thanks to a new research project launched by the University of Exeter.

Noelle and Darwinia are two adult female leatherback turtles that nest in Gabon, Western Central Africa. The research team has fitted each turtle with a small satellite tracking device, which enables the scientists to monitor their precise movements and observe where and how deep they dive. The tracking began on 7 December 2009 and so far the turtles have traveled 800 miles between them.

Their progress can now be viewed online: www.seaturtle.org/tracking and people can also get the latest news on the turtles by signing-up for daily email alerts. Noelle and Darwinia are members of the world's largest nesting population of leatherback turtles, but their environment is threatened. The waters around Gabon are increasingly subject to industrial fishing and oil exploitation, particularly from nations outside West Africa, including countries in Europe.

A team from the University of Exeter, the Government of Gabon and a network of NGO's in country, including the Wildlife Conservation Society and Seaturtle.org, is now undertaking research to learn where these creatures go. The researchers hope their findings will enable government agencies to protect key areas from the impacts of fishing, oil exploitation and pollution.

The project has been funded by Defra's Darwin Initiative, which draws on the wealth of biodiversity expertise within the UK to help protect and enhance biodiversity around the world.

Dr Matthew Witt of the University of Exeter is a member of the project team. He said: "We are building a high precision model of how these amazing creatures use the seas near Gabon to breed. Our aim is that this will help inform management of fisheries and mineral exploration as well as feeding into ambitious plans to widen the network of marine protected areas in Gabon. It is only by having detailed information on where these creatures go that we can try to protect them."

"Sea turtles are the ancient mariners of the world" said Dr Howard Rosenbaum, Director of the Wildlife Conservation Society's Ocean Giants Program. "Understanding broader migration patterns and use of the nearshore habitat around their nesting beaches is a key component to their conservation."

The team hopes that the turtles' journeys will capture the public imagination over Christmas. Dr Witt continues: "It is exciting to see where these creatures travel and to delve into their lives in the vast South Atlantic Ocean. Over the Christmas period we will follow their movements with great interest with the hope that the information we gather can feed into truly useful approaches to help promote the protection of the species"