This is a printer version of an UnderwaterTimes.com article.
To view the article online, visit: http://www.underwatertimes.com/news.php?article_id=93476110502 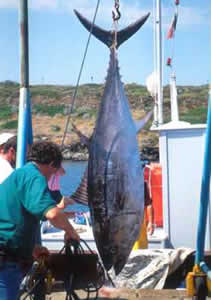 WASHINGTON, D.C. -- Dr. Jane Lubchenco, under secretary of commerce for oceans and atmosphere and NOAA administrator issued the following statement urging the International Commission for the Conservation of Atlantic Tunas (ICCAT) to heed the scientific advice and adopt measures that will end overfishing in the Eastern Atlantic and Mediterranean and put bluefin tuna on the path to recovery. The ICCAT is scheduled to meet this week in Brazil.

“As a member of ICCAT, the United States has a responsibility to work with other countries to end illegal, unreported and unregulated fishing, and implement strong management measures that will end overfishing and help rebuild the stocks.

“The status quo with respect to eastern Atlantic and Mediterranean bluefin is neither sustainable nor acceptable. Conservation of this species depends on science-based management and effective compliance with the rules on both sides of the ocean.

“I believe that to be most effective, the long-term management of the species must be led by ICCAT. I urge ICCAT to do the right thing – follow the science and implement strong new measures to protect the bluefin. I look to ICCAT for strong and definitive action at this week’s meeting.” Background:

ICCAT, an international body of 47 nations and the European Community, is responsible for the management of Atlantic bluefin tuna. The United States has repeatedly urged ICCAT to heed the scientific advice and adopt measures that will end overfishing in the eastern Atlantic and Mediterranean and put bluefin tuna on the path to recovery. This includes measures setting responsible, science-based quotas, stronger enforcement of those quotas, and closures during spawning periods.

The United States delegation to ICCAT travels to Brazil this week for the body’s annual meeting. This year, as in years past, the United States is seeking the strongest possible management for the conservation of Atlantic bluefin tuna.

On October 14, the United States announced its support of Monaco’s proposal to list Atlantic bluefin tuna on Appendix I of the Convention on International Trade in Endangered Species of Wild Fauna and Flora (CITES), to prohibit international trade of the species. The final U.S. decision on whether to vote for Monaco’s proposal at the 2010 CITES Conference of Parties will take into account whether or not ICCAT adopts strong management and compliance measures at this week's meeting.