This is a printer version of an UnderwaterTimes.com article.
To view the article online, visit: http://www.underwatertimes.com/news.php?article_id=91100643572

Scientists Find Heat-tolerant Coral Reefs That May Resist Climate Change; 'May Be Tougher Than We Thought'
Underwatertimes.com News Service
May 20, 2009 20:15 EST 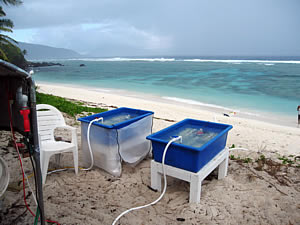 PALO ALTO, California -- Experts say that more than half of the world's coral reefs could disappear in the next 50 years, in large part because of higher ocean temperatures caused by climate change. But now Stanford University scientists have found evidence that some coral reefs are adapting and may actually survive global warming.

"Corals are certainly threatened by environmental change, but this research has really sparked the notion that corals may be tougher than we thought," said Stephen Palumbi, a professor of biology and a senior fellow at Stanford's Woods Institute for the Environment.

Palumbi and his Stanford colleagues began studying the resiliency of coral reefs in the Pacific Ocean in 2006 with the support of a Woods Institute Environmental Venture Project grant. The project has expanded and is now being funded by Conservation International and the Bio-X program at Stanford.

"The most exciting thing was discovering live, healthy corals on reefs already as hot as the ocean is likely to get 100 years from now," said Palumbi, director of Stanford's Hopkins Marine Station. "How do they do that?"

Coral reefs form the basis for thriving, healthy ecosystems throughout the tropics. They provide homes and nourishment for thousands of species, including massive schools of fish, which in turn feed millions of people across the globe.

Corals rely on partnerships with tiny, single-celled algae called zooxanthellae. The corals provide the algae a home, and, in turn, the algae provide nourishment, forming a symbiotic relationship. But when rising temperatures stress the algae, they stop producing food, and the corals spit them out. Without their algae symbionts, the reefs die and turn stark white, an event referred to as "coral bleaching."

During particularly warm years, bleaching has accounted for the deaths of large numbers of corals. In the Caribbean in 2005, a heat surge caused more than 50 percent of corals to bleach, and many still have not recovered, according to the Global Coral Reef Monitoring Network, an international collaboration of government officials, policymakers and marine scientists, including Palumbi.

In recent years, scientists discovered that some corals resist bleaching by hosting types of algae that can handle the heat, while others swap out the heat-stressed algae for tougher, heat-resistant strains. Palumbi's team set out to investigate how widely dispersed these heat-tolerant coral reefs are across the globe and to learn more about the biological processes that allow them to adapt to higher temperatures.

The island offered the perfect laboratory setting, Oliver said, with numerous corals hosting the most common heat-sensitive and heat-resistant algae symbionts. Ofu also has pools of varying temperatures that allowed the research team to test under what conditions the symbionts formed associations with corals.

In cooler lagoons, Oliver found only a handful of corals that host heat-resistant algae exclusively. But in hotter pools, he observed a direct increase in the proportion of heat-resistant symbionts, suggesting that some corals had swapped out the heat-sensitive algae for more robust types. These results, combined with regional data from other sites in the tropical Pacific, were published in the journal Marine Ecology Progress Series in March 2009.

To see if this pattern exists on a global scale, the researchers turned to Kevin Arrigo, an associate professor of environmental Earth system science at Stanford and an expert on remote satellite sensing of marine microalgae. Arrigo gathered worldwide oceanographic data on a variety of environmental variables, including ocean acidity, the frequency of weather events and sea-surface temperature.

Oliver then compiled dozens of coral reef studies from across the tropics and compared them to Arrigo's environmental data. The results revealed the same pattern: In regions where annual maximum ocean temperatures were above 84 to 88 degrees Fahrenheit (29 to 31 degrees Celsius), corals were avoiding bleaching by hosting higher proportions of the heat-resistant symbionts.

Most corals bleach when temperatures rise 1.8 F (1 C) above the long-term normal highs. But heat-tolerant symbionts might allow a reef to handle temperatures up to 2.6 F (1.5 C) beyond the bleaching threshold. That might be enough to help get them through the end of the century, Oliver said, depending on the severity of global warming.

A 2007 report by the United Nations International Panel on Climate Change concluded that the average surface temperature of the Earth is likely to increase 3.6 to 8.1 F (2 to 4.5 C) by 2100. In this scenario, the symbiont switch alone may not be enough to help corals survive through the end of the century. But with the help of other adaptive mechanisms, including natural selection for heat-tolerant corals, there is still hope, Oliver said.

"These findings show that, given enough time, many corals can match hotter environments by hosting heat-resistant symbionts," he explained. "While hopeful, the work also suggests that modern environments are changing so rapidly that corals may not be able to keep up. It comes down to a calculation of the rates of environmental change versus the rates of adaptation."

Heat-resistant corals also turn out to be more tolerant of increases in ocean acidity, which occurs when the ocean absorbs excess carbon dioxide from the atmosphere--another potential threat to coral reefs. This finding suggests that corals worldwide are adapting to increases in acidity as well as heat, Oliver said, and that across the tropics, corals with the ability to switch symbionts will do so to survive.

The problem of coral bleaching comes down to a collapse of the algae at the cellular level, Oliver explained. But the molecular biology of corals and their zooxanthellae under stress is shockingly understudied, he added.

To examine the corals and their symbionts at the molecular level, the researchers are collaborating with John Pringle, a professor of genetics at Stanford. Pringle and his lab have set up tanks where anemones, corals and their algae are exposed to a variety of treatments, including changes in temperature, acidity and light. That research is ongoing.

"What I hope is that we will learn some really deep and interesting things about the cellular and genetic mechanisms that allow this symbiosis to function, and about the mechanisms that come into play when the symbiosis is breaking down under stress," Pringle said. "The longer-range hope is that having that understanding will contribute to efforts in coral conservation."

The ultimate goal is to find protein biomarkers that indicate signs of heat stress and potential heat resistance, Oliver explained. Then coral reef managers could go to a reef, take small coral samples and test for the presence of the biomarkers to see how resilient the reef will be to higher temperatures.

"With this tool, managers could identify existing populations that may be more resistant to climate change and potentially prioritize their protection from everything else that kills coral reefs, like fishing and [agricultural] runoff," Oliver said.

"Although we are doing things to the planet we have never done before, it's hard to imagine that these corals, which have existed for a quarter of a billion years, only have 50 years left," Palumbi said. "And part of our job might be to figure out where the tougher ones live and protect those places."

Cassandra Books is a science-writing intern at the Woods Institute for the Environment at Stanford.