This is a printer version of an UnderwaterTimes.com article.
To view the article online, visit: http://www.underwatertimes.com/news.php?article_id=91076541023 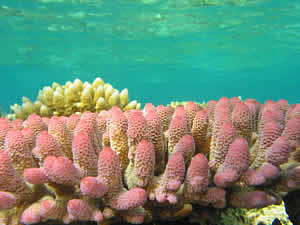 Rhythm helps to keep corals going through the lonely low-point of the night, when their partner robs them blind. credit ARC

TOWNSVILLE, Queensland -- The world's corals not only display stunning beauty and diversity â they also have rhythm, man. And that helps to keep them going through the lonely low-‐point of the night, when their partner robs them blind.

That corals, among the simplest of Earth's creatures, have some curiously human-‐like attributes is emerging in a fresh set of revelations from by an international team of Australian and Israeli coral geneticists at the ARC Centre of Excellence for Coral Reef Studies which highlight some of the things we and corals have in common, thanks to our shared genes.

Both corals and people have circadian rhythms which govern our body functions according to changes in day and night or season, explains Professor David Miller of CoECRS and James Cook University. Corals use these rhythms to dictate their feeding and breeding and to manage their symbiotic relationship with algae.

But the corals appear to have taken rhythm to an intense pitch, to the point where they have developed an internal 'clock' that ticks reliably even if the corals are no longer stimulated by external signals like the change from day to night or full moon to total dark â whereas many humans are adrift without a wristwatch.

To study the process the team used microarray analysis, taking samples every four hours under conditions of normal light/dark and total darkness. This enabled them to see that the corals were running two separate circadian systems in parallel. Two "young guns" of coral biology, Oren Levy of Bar-‐Ilan University and Paulina Kaniewska of The University of Queensland did much of the field and lab work associated with the project and deserve recognition for applying their combined expertise to what has become the model coral for molecular analysis, Acropora millepora.

"This ability to tell the time appears hard-‐wired into corals," Prof. Miller says. "What they do is automatically make a whole swag of "emergency response" proteins known as chaperones â molecules that mop up the damage that corals sustain every day when their symbiotic algae carry out photosynthesis. It is something they have learned to do automatically â probably because it was a matter of life or death."

Independently of the internal clock, another typically vertebrate-‐like response saves the corals from 'suffocating' during the hours of darkness, when their symbiotic algae (zooxanthellae) reverse their usual supportive role in the partnership â and begin to rob the corals of precious oxygen, which they (the algae) need for survival until daylight comes again.

During this deep, dark period, the coral responds by making more of the same enzymes that help a sprinter's muscles deal with a lack of oxygen, enabling it to struggle through this period of oxygen-‐stressed depression and live to see another day â when the algae will be powered up again by the sun and return to their domestic duties of nourishing the coral.

Close study of the sets of genes involved in this subtle interaction has persuaded Prof. Miller and his international colleagues that coral's rhythms in response to light/dark cycles operate in two distinctly different ways at the same time â there are those that are primed directly by the coral's own molecular timekeeper , some of these being "hard-‐wired" to the coral clock, but also other coral genes that respond indirectly to light/dark cycles, by sensing changes in oxygen levels in the coral tissue that result from algal activity. Both systems are necessary to the survival of the symbiotic 'marriage' of the coral animal with a completely different lifeform, a plant.

"Like any marriage, symbiosis is demanding â and one partner often has to make big changes to accommodate the other," observes Professor Ove Hoegh-‐Guldberg of CoECRS and The University of Queensland. "The zooxanthellae appear to have forced these enormous changes on the corals â but then corals have had at least 240 million years to do adapt to symbiosis, as many kinds of fossil corals are known from the period immediately after the mass extinctions that occurred at the end of the Permian.

"It's a fresh example of the marvelous complexity and interplay that takes place in the partnership, where both have evolved sets of genes that enable them to survive with the other's quirks.

"We think this new insight will help further our understanding of how other symbiotic partnerships work, in clams for example."

In studying coral's circadian rhythm, the team found that being a simple 'animal' it shares a number of genes in common with humans and other vertebrates which function when stimulated by the change from light to dark â but it also has genetic pathways similar to those of insects, which can function independently. This, perhaps, is what gives it the ability to live in union with a plant.