This is a printer version of an UnderwaterTimes.com article.
To view the article online, visit: http://www.underwatertimes.com/news.php?article_id=91010375426 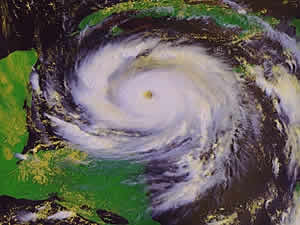 New research suggests earlier studies have overestimated the amount of hurricane-induced ocean heating and its overall impact on climate.

CAMBRIDGE, Massachusetts -- The role of hurricanes in the global climate system has gained interest ever since scientists suggested that strong hurricanes have become more frequent in recent decades and might continue to do so as the planet warms. Because hurricanes are known to influence the oceans and overall climate system, the consequences of the increase in the frequency of hurricanes could reach further.

When a hurricane passes over an ocean, its powerful winds stir and mix the warm surface water with the colder, deeper water. This mixing results in warm water being forced down into the deep ocean and cold water being brought to the surface layer. Scientists know that the cold water near the surface is reheated by the atmosphere to pre-hurricane temperatures within a few weeks, but they have been less clear on what happens to the warm water mixed into the deep ocean. It has been suggested that this heat is transported toward the poles by ocean currents and contributes to the ocean heat transport, the process by which oceans regulate our climate by transporting warm water away from the equator and cold water toward the equator. It has also been speculated that the heat pumped into the ocean by hurricanes strengthens subsequent storms that pass over the same part of the ocean, because ocean heat is the energy source that powers hurricanes. Stronger storms would then mix even more heat into the ocean driving a positive feedback loop for hurricane intensity.

A new MIT analysis suggests that previous studies have overestimated the amount of hurricane-induced ocean heating and its overall impact on climate. The analysis indicates that previous estimates have failed to consider how the oceans change with the seasons.

Most of the heat from the warm water that hurricanes mix deep into the oceans during the summer and early fall is returned to the atmosphere in the winter, meaning these “warm anomalies” don’t appear to affect the long-term state of the oceans, according to a paper published Feb. 10 in Geophysical Research Letters by Raffaele Ferrari, the Cecil and Ida Green Professor of Oceanography in the Department of Earth, Atmospheric and Planetary Science; graduate student Malte F. Jansen; and undergraduate student Todd Mooring.

By analyzing the paths of almost 1,000 tropical cyclones, as well as data about the sea surface temperature and height before and after each storm, Ferrari and his students estimate that only about one-quarter of the warm water that is mixed downward by a hurricane remains in the ocean for more than a season.

Previous estimates, including a 2001 study by Kerry Emanuel, the Breene M. Kerr Professor of Atmospheric Science, suggested that on average, hurricanes contribute about one petawatt (equal to one quadrillion watts) of heat to the estimated two to four petawatts of heat that the ocean transports out of the tropics and toward the poles each year.

Although Emanuel and a colleague concluded in 2008 that only about half of the heat pumped into the ocean by hurricanes contributes to the total ocean heat transport toward the poles, Jansen said this study did not consider the crucial role of the seasonal cycle.

To calculate the fraction of heat from the mixed layer that is deposited into the permanent thermocline in the tropics, the researchers relied on theoretical models, as well as data about how the oceans changed as a result of all tropical cyclones that occurred between 1998 and 2006. Previous work, not related to Emanuel’s estimates, calculated that about half a petawatt of heat is pumped into the ocean during a hurricane. Using a formula that takes into account how the mixed layer deepens during the winter, Ferrari’s team concluded that this amount is actually between zero and .3 petawatts with a most likely estimate of .15 petawatts.

The analysis suggests that the major part of a warm anomaly sits in the seasonal thermocline until the following winter, when it is reabsorbed by the deepened mixed layer; at that point, it interacts with the atmosphere and releases its extra heat. Rather than contributing to ocean heat transport, therefore, the warm anomalies function as thermostats by transferring their heat to the atmosphere during the winter. Additional research would presumably focus on the effects of this warmer atmosphere during winter.

Emanuel praised the result, noting that “the path is different from what we initially envisioned” almost a decade ago. He explained that the interest in ocean mixing has grown recently also because of its potential biological consequences. Because cold water contains more dissolved carbon dioxide than warm water, when hurricanes bring that cold water closer to the surface, the carbon dioxide interacts with and enters the atmosphere. At the same time, however, as the nutrient-rich cold water is pushed closer to the surface and becomes exposed to sunlight, the number of tiny plant-like microorganisms called phytoplankton multiplies. When the plankton eventually die, the carbon in their shells is deposited at the bottom of the sea. Ferrari predicts that the seasonal effects of ocean mixing will become major factors for research that seeks to determine the net balance of carbon dioxide leaving and staying in the ocean.

Jansen added that a potential next step for research on tropical cyclones and ocean mixing could examine how hurricane-induced ocean heating affects El NiÃ±o, a weather pattern in the Pacific Ocean where most of the strongest tropical cyclones occur, that is related to large climate disturbances. Whether the warm water mixed deep into the Pacific during a hurricane somehow affects El NiÃ±o remains unknown, partly because there isn’t enough quality data, according to Jansen.