This is a printer version of an UnderwaterTimes.com article.
To view the article online, visit: http://www.underwatertimes.com/news.php?article_id=90631057218 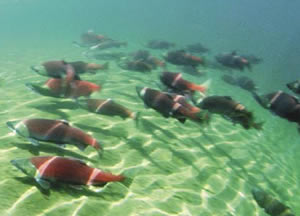 WASHINGTON, D.C. -- NOAA today issued a biological opinion to the Environmental Protection Agency that found three chemicals used in pesticides – diazonin, malathion, and chlorpyrifos - are likely to jeopardize 27 populations of salmon on the West Coast that are listed as either endangered or threatened. The opinion calls for buffer zones next to salmon streams where the chemicals are used.

A biological opinion is NOAA Fisheries Service's assessment of whether a federal action is likely to jeopardize an endangered or threatened species, or its critical habitat.

EPA will use NOAA’s biological opinion as it decides how pesticides containing the three chemicals can be used. EPA examines and registers ingredients of a pesticide to ensure there will be no unreasonable adverse effects. Once registered, a pesticide must be used in a way that is consistent with approved directions on the label.

“Scientific research has shown that these three chemicals when found in streams can damage and even kill salmon,” said Jim Balsiger, acting NOAA assistant administrator for NOAA’s Fisheries Service. “The chemicals may also harm stream water quality and the small fish and insects that salmon eat. The restrictions are designed to prevent harmful effects. ”

Some of the required restrictions of the biological opinion include:

NOAA scientists found the chemicals not only can be lethal to salmon at certain concentrations, but can also hinder salmon growth at lower levels of concentration by impairing their ability to smell their prey and by reducing the amount of small fish and insects for food. The chemicals have also been found to slow the swimming of salmon or make their swimming erratic, impairing their ability to return to their natal streams to spawn and to avoid predators.

The final biological opinion is the first in a series that NOAA will issue between now and Feb. 29, 2012, to the EPA concerning a total of 37 active chemical ingredients in pesticides. EPA requested that NOAA prepare the biological opinions as the result of lawsuits from environmental groups in recent years.