This is a printer version of an UnderwaterTimes.com article.
To view the article online, visit: http://www.underwatertimes.com/news.php?article_id=90256418710 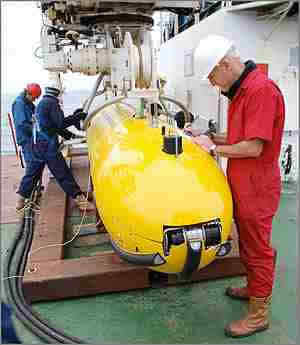 SOUTHAMPTON, U.K. -- The United Kingdom’s deepest diving Autonomous Underwater Vehicle (AUV), Autosub6000, has been put through its paces during an extremely successful engineering trials cruise on the RRS Discovery, 27 September to 17 October 2009.

Autosub6000 was working in regions of the Iberian Abyssal Plain in the North Atlantic deeper than 5600 metres and also around the steep and rugged terrain of the Casablanca Seamount, between Madeira and Morocco. The vehicle was designed and constructed by engineers at the Underwater Systems Laboratory in the National Oceanography Centre, Southampton.

One of the main goals of the Autosub6000 engineering trials was the demonstration of the accessibility of deep ocean regions approaching the 6000 metre design depth limit. On 3 October 2009, the AUV descended and reached it’s pre-programmed target depth of 5525 metres in 1.5 hours. At this point, a navigation update procedure was undertaken to update and correct for the Autosub6000’s drift which was incurred as it descended through the moving water column. After 2.5 hours from deployment, the Autosub6000 was on station at a depth of 5600 metres, positioned to accuracies of a few metres, and ready to start collecting scientific data.

Autosub6000 has been enhanced with a forward-looking vertically scanning obstacle-detection sonar and improved terrain-following control software, giving the AUV the ability to operate safely, closer to the seabed. This was demonstrated at low altitudes in the steep and rugged slopes of the Casablanca Seamount with a 10 metre altitude run starting at 3000 metres depth and rising up to 700 metres depth over a course of 7.5 kilometres. The ability of Autosub6000 to perform low-altitude colour photographic surveys was demonstrated on the more level summit regions of the Casablanca Seamount with low-speed surveys at altitudes of as low as 3 metres.

Steve McPhail, Autosub6000 project leader, said, “Apart from the correct functioning of the vehicle during the trials at extreme depths, what particularly pleased me was that we have now developed the control and obstacle avoidance systems such that we have the confidence to send the AUV into a hostile and rugged terrain. This will lead to more challenging and interesting scientific campaigns in the future.”

Autosub6000 is now being prepared for a cruise on board the RRS James Cook to the Caribbean Sea near the Cayman Islands in April 2010, where it will be used in conjunction with the remotely operated vehicle Isis to search for deep hydrothermal vents.