This is a printer version of an UnderwaterTimes.com article.
To view the article online, visit: http://www.underwatertimes.com/news.php?article_id=89105237046 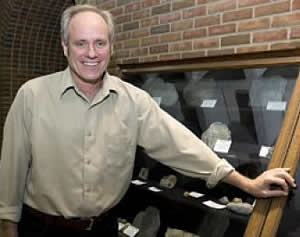 Caption: Arnie Miller is a professor of geology at the University of Cincinnati. Credit: Dottie Stover/UC Photographic Services

CINCINNATI, Ohio -- Arnie Miller, University of Cincinnati professor of paleontology in the McMicken College of Arts & Sciences, and co-author Michael Foote of the University of Chicago publish their research in the Nov. 20 issue of Science with their paper, "Epicontinental Seas Versus Open-Ocean Settings: The Kinetics of Mass Extinction and Origination."

For many years, paleobiological researchers interested in the history of biodiversity have focused on charting the many ups (evolutionary radiations) and downs (mass extinctions) that punctuate the history of life. Because the preserved record of marine (sea-dwelling) animals is unusually extensive in comparison, say, to that of terrestrial animals such as dinosaurs, it's been easier to accurately calibrate the diversity and extinction records of marine organisms.

"Paleontologists now recognize that there were five particularly large, worldwide mass extinction events during the history of life, known among the cognoscenti as 'The Big Five,'" says Miller. "Much ink in research journals has been spilled over the past few decades on papers investigating the causes of these events."

Although researchers have long understood the potential value of "dissecting" mass extinctions, to ask whether some environments and organisms were affected more dramatically than others, little attention has been paid to a major dichotomy observed among marine sedimentary rocks and fossils: the distinction between epicontinental seas, which were broad shallow seas (typically less than 100 meters in depth) that once covered large regions of present-day continents, and open-ocean-facing coastlines, such as the continental shelves that rim many continents.

Today, it is difficult to appreciate that there was a time when regions such as Cincinnati were once covered by epicontinental seas, which gradually diminished over time so that almost none are left in the present day. And yet, a large percentage of Earth's fossil record is associated with these settings in the geological past, and there are many reasons to believe that their environmental properties were very different from open-ocean settings.

For one thing, because they were so broad and relatively flat, drops in sea level should have had more drastic effects on epicontinental seas because large regions could have been drained entirely in a short amount of time. On the other hand, the sluggish circulation associated with epicontinental seas may have inhibited the spread of the waterborne effects of such events as volcanic eruptions and asteroid impacts, which may have been more effective killing agents in open oceans.

In their research, Miller and Foote assembled data on the occurrences of marine genera from the Paleobiology Database (http://paleodb.org) for the Permian through Cretaceous periods, during which both major settings are well preserved in the fossil record. From that, they determined whether these occurrences were from epicontinental seas or open-ocean-facing settings, and they then compared extinction and origination rates in the two settings throughout the interval.

"This was a particularly juicy interval to work with, because it includes three of The Big Five, including the Late Permian mass extinction, the largest extinction in the history of marine animal life, and the end-Cretaceous event, which also did in the dinosaurs and has been associated previously with the impact of a big comet or asteroid," Miller says.

Miller and Foote found that, while extinction rates in the two settings did not generally differ from one another during "background" times between mass extinctions, there was a strikingly different pattern for the mass extinctions: extinctions rates during mass extinctions were significantly higher in open-ocean-facing settings than in epicontinental seas, indicating that open-ocean settings were more susceptible to the mass-extinction-causing agents.

The only exception to Miller and Foote's basic finding was an interval of heightened extinction in the run-up to the big event at the end of the Permian, during which the extinction rate was higher in epicontinental seas. But this interval had already been fingered by previous researchers as one in which there was a big sea-level decline, so Miller and Foote's finding bolsters the view that a drop in sea level was uniquely important as a cause of extinction in that interval.

For their analysis, Miller and Foote looked at several hundred thousand occurrences of fossils throughout the world assembled from the Paleobiology Database and used paleogeographic maps on which they had delineated the boundaries of epicontinental seas to determine whether individual occurrences were from epicontinental seas or the open ocean. "We then determined from these occurrences whether a given genus had a statistically significant tendency to occur in one setting more often than in the other, and if so, it was classified as open-ocean 'loving' or epicontinental-sea 'loving,'" Miller explains. "Our assessments of extinction and origination rates for the two settings were based on these assignments."

Anticipating that biologists might ask if the results primarily reflected a property unique to bivalve mollusks, which comprise a plurality of the data, Miller and Foote ran their analysis again using everything but the bivalves and obtained the same pattern. Similarly, because epicontinental seas tend to be associated with tropical latitudes dominated by carbonate (biologically derived) sediments and open-ocean settings occur more frequently in nontropical latitudes dominated by terrigenous (land-derived) sediments, Miller and Foote extracted subsets of the data limited only to tropical carbonates and nontropical terrigenous sediments and then split them into epicontinental seas versus open oceans. In nearly all cases they got the same results, thereby making it clear that their results truly reflected a difference between epicontinental seas and open oceans.

"One clear outcome of our analyses is that different marine environments respond differently to agents of mass extinction," says Miller. "Given present-day concerns that physical agents such as the accelerated pace of global warming may be inducing a 'sixth' extinction, we might also ask whether some present-day marine settings are likely to be more susceptible than others to the effects of extinction-causing agents."

Although their results to date are compelling, Miller and Foote are not done. Among other things, they intend to extend their analyses back through the entire Paleozoic Era, when epicontinental seas were at their zenith. They will be especially interested in the response of the marine biota to the other two of The Big Five mass extinctions: the Late Ordovician and Late Devonian events.