This is a printer version of an UnderwaterTimes.com article.
To view the article online, visit: http://www.underwatertimes.com/news.php?article_id=86132409510 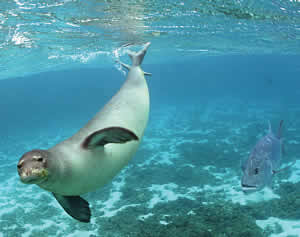 SILVER SPRING, Maryland -- Researchers from NOAA have discovered a potent and highly-debilitating toxin in the endangered Hawaiian monk seal, a first-of-its-kind chemical finding that is now prompting investigations of other marine mammals in the state.

The toxin, ciguatoxin, is produced by marine algae common on coral reefs, and accumulates in fish species that are consumed by humans. Ciguatera, the human disease caused by ciguatoxin, affects thousands of people every year worldwide and comes in the form of acute gastrointestinal and neurological illness with symptoms resembling chronic fatigue syndrome.

The study reveals that Hawaiian monk seals, whose population is estimated at 1100-1200, are exposed to significant levels of these ciguatoxins. The threat could pose management challenges for this species that has been dwindling at four percent annually due to poor foraging success and additional environmental and human factors.

Monk seals were sampled throughout the Hawaiian Islands, including in the Papahānaumokuākea Marine National Monument. Samples were then shipped to NOAA's National Centers for Coastal Ocean Science laboratory in Charleston, S.C. for toxin analyses.

"Based upon this study, we believe that ciguatoxin exposure is common in the monk seal population," said Charles Littnan, study co-author and scientist with NOAA Pacific Islands Fisheries Science Center. "This study is an important first step. However, we still need to understand more clearly how widespread exposure is and more importantly what role it may be playing in the decline of the species."