This is a printer version of an UnderwaterTimes.com article.
To view the article online, visit: http://www.underwatertimes.com/news.php?article_id=85201647310

Researchers Study Undersea Rivers With A Yellow Submarine; 'The Flow In These Channels Is Quite Different'
Underwatertimes.com News Service
August 2, 2010 21:16 EST 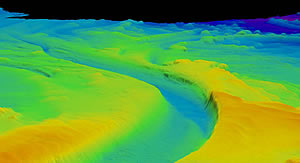 LEEDS, U.K. -- A team of scientists led by the University of Leeds has used a robotic 'yellow submarine' to observe detailed flows within an 'undersea river' for the very first time.

The researchers estimate that the river - known as a submarine channel - would be the sixth largest river in the world if it were on land based on the amount of water flowing through it.

Submarine channels are similar to land rivers, but they are formed by density currents - underwater flow mixtures of sand, mud and water that are denser than sea water and so sink and flow along the bottom.

These channels are the main transport pathway for sediments to the deep sea where they form sedimentary deposits. These deposits ultimately hold not only untapped reserves of gas and oil, they also house important secrets - from clues on past climate change to the ways in which mountains were formed.

Now the team, led by Dr Dan Parsons and Dr Jeff Peakall from the University of Leeds, has been able to study the detailed flow within these channels. Dr Parsons, said: "The channel complex and the density flow provide the ideal natural laboratory for investigating and detailing the structure of the flow field through the channel.

"Our initial findings show that the flow in these channels is quite different to the flow in river channels on land. Specifically as flow moves around a bend it spirals in the opposite direction in the deep sea compared to the spiral to that found in river channels on land. This is important in understanding the sedimentology and layers of sediment deposited by these systems."

It is thought by some that the channels in the Black Sea were formed around 6,000 years ago when sea levels were approaching their current point. The Mediterranean swelled and breached through into the Black Sea - once an isolated freshwater lake - via the Bosphorus Strait. As the waters surged, they carried a dense, salty fluid which formed a network of sea-floor channels that are almost constantly active, even today.

Some people even believe that this was the biblical event Noah's flood, but despite their historical significance, the first spectacular images of these submarine channels were only obtained in 2006 (by researchers at Memorial University, Newfoundland, Canada who are project partners in this study).

Submarine channels are notoriously difficult to study because of their power and unpredictability. In the past they have been known to destroy scientific equipment and as a consequence most existing knowledge about them has been obtained from small scale laboratory measurements and from examples of past channels now exposed on dry land.

To tackle this problem, the team used the Natural Environment Research Council's (NERC) Autosub3 - a 7-metre torpedo-shaped robot - to get up close and personal with the sea-floor. Because it has an accurate positioning system, the sub can be programmed to stay just above the channels - safe from damage.

The team will use the data obtained to create innovative computer simulations that can be used to model how sediment flows through these channels. The models the team will produce will have broad applications, including inputting into the design of seafloor engineering by oil and gas companies.