This is a printer version of an UnderwaterTimes.com article.
To view the article online, visit: http://www.underwatertimes.com/news.php?article_id=84362101905 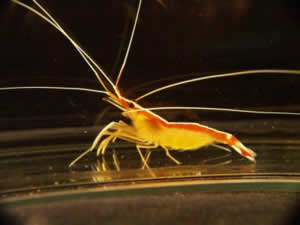 This is a cleaner shrimp Lysmata amboinensis. Credit: Janine Wong

L. amboinensis are protandric simultaneous hermaphrodites. This means that they start out as males but, as they grow, they also develop female reproductive organs. However, while they are then both male and female, they cannot self fertilize. Timing of sex is complicated. Individuals mating as females can only do so in the few hours after molting, but are able to reproduce as males at all other times (even when incubating eggs). These 6cm long shrimp survive by eating parasites and dead skin from 'client' fish in the Indo-Pacific or Red Sea. As payment for their beauty treatment the fish refrain from eating their cleaners.

Janine Wong and Prof Nico Michiels from the University of TÃ¼bingen separated L. amboinensis shrimp into aquariums in groups of two, three or four. To minimize competition for resources the shrimp within each tank were approximately the same size, had limitless access to food, and each shrimp was provided with the same volume of water and a perch. After only 42 days researchers found that in all groups larger than pairs one or more shrimp had been attacked and killed. The shrimp were killed during the night, just after shedding their old skin, when they were less able to defend themselves.

Janine Wong explained, "In the wild monogamy is only seen for shrimp which have adopted the symbiotic 'cleaner' lifestyle. For these shrimp, competition for food is likely to be the driving force behind their monogamy (more shrimp equals less food per shrimp) and, since body size is linked to the number of eggs laid, a large group would decrease each individual's potential to produce offspring. Confirming this hypothesis we found that shrimp molting was delayed in the larger two group sizes, despite the freely available food, and that once the group size had reduced to two, the rate of molting increased for the remaining shrimp."