This is a printer version of an UnderwaterTimes.com article.
To view the article online, visit: http://www.underwatertimes.com/news.php?article_id=83691024571 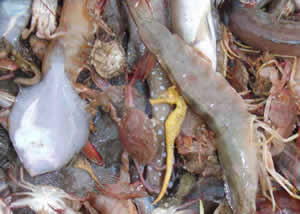 Trawl nets grab any and all forms of marine life, laying waste to the ocean floor. credit Sarah Foster

VANCOUVER, BC, Canada -- To protect our oceans from irreversible harm, governments, conservationists, and researchers around the world must address the enormous threat posed by unregulated and destructive fisheries, say top marine scientists.

In an article published today in Science, Prof. Amanda Vincent of Project Seahorse at the University of British Columbia and Dr. Jean M. Harris of Ezemvelo KZN Wildlife in South Africa call for bold new approaches to the pressing global issue of overfishing and habitat destruction, including networks of marine protected areas, co-ordinated governance, and the co-management of fisheries with local communities.

"Governments and conservationists have tended to focus on the impact of industrial-scale fishing, which is indeed a big problem. At the same time, we must pay attention to small, local fisheries," says Vincent. "They are ubiquitous in the world's coastal waters and, unlike large fisheries, generally operate without oversight or record-keeping. Their impact may be small but cumulatively, it's massive."

Small-scale fisheries involve about 90% of the world's fishers. Most of these 100 million or so fishers depend on the ocean for their livelihoods and many catch fish and other marine animals at unsustainable levels.

Destructive fishing practices such as bottom trawling make matters worse. Trawl nets grab any and all forms of marine life, laying waste to the ocean floor. The total area bottom trawled is nearly 150 times the area of forest that is clearcut annually around the world.

As targeted fish species shrink, both industrial and small-scale fishers move on to other species, depleting them, too, until finally they are catching anything that might provide food or generate cash. Government subsidies, in the absence of regulation, often serve to encourage this overfishing and habitat destruction â and must be abolished.

"We must act now with the most promising tools at hand. No-take marine reserves are one critical approach," says Harris. "Research shows they can be set up quickly to provide vital refuge for species to recover."

Smarter governance is equally important, says Harris: "What we know from the failure of management schemes globally is that regulation at the national level is not enough. Every layer of government, including regions and communities, must help small-scale fishers get control of the fisheries on which they depend."