This is a printer version of an UnderwaterTimes.com article.
To view the article online, visit: http://www.underwatertimes.com/news.php?article_id=83467101059 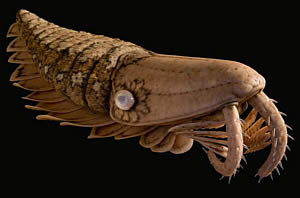 NEW YORK, New York -- The Cambrian Period's most ferocious predator clung to life for 30 million years longer than was previously thought. Fossils from Morocco show that sea creatures known as anomalocaridids survived long after they had been understood to have gone extinct, and their bodies grew to lengths in excess of one metre.

"Anomalocaridids are always depicted as these fierce horrible predators, ripping up things and tearing them apart â and no doubt some of them were," says Peter Van Roy, a palaeontologist at Yale University in New Haven Connecticut, who describes the findings today in Nature1, with his colleague Derek Briggs. The creatures were thought to have died out by the end of the Cambrian Period, about 500 million years ago, but "this discovery shows that anomalocaridids persisted for a lot longer and were still very successful predators at the top of the food chain".

Although the latest fossils were unearthed in North Africa and the imposing invertebrates are known to have prowled oceans worldwide, anomalocaridids are inextricably linked with the Burgess Shale, a rock formation in western Canada that contains the fossils that helped to define the Cambrian explosion â a time when strange-looking marine animals proliferated.

Anomalocaridids are bizarre even by Cambrian standards. From the late nineteenth century onwards, fossils of various body parts from the creatures were discovered separately, and attributed to ancient relatives of shrimp, sea cucumbers, jellyfish and arthropods. Only in 1985 did Briggs and a colleague realize that these bits and pieces belonged to a single kind of animal, with two tentacle-like appendages at its head, a flat, segmented body and a mouth shaped like a pineapple ring with teeth projecting towards the centre. They named it Anomalocaris2.

Fossil discoveries have since revealed that anomalocaridids came in diverse shapes and sizes â from Hurdia victoria, with its triangular carapace, to Schinderhannes bartelsi, with its long, pointed tail â and lived in the areas that are now Europe, the United States, Australia and China. But ancient relatives of sea scorpions and nautiluses that emerged in the Ordovician Period (490 millionâ440 million years ago) were suspected to have out-competed the anomalocaridids, causing them to die out, says Van Roy.

In 2008, however, an amateur collector, Mohammed Ben Said Ben Moula, discovered specimens that looked like anomalocaridids, Van Roy says. But it wasn't until 2009, when the researchers took a trip to the Fezouata rock formation in southeast Morocco, that they realized just what Ben Moula had discovered.

The rocks were from the early Ordovician Period, about 488 millionâ472 million years old â much younger than any in which such fossils had previously been found. "It was quite an indescribable moment when you're putting these things together and suddenly you realize this is an anomalocaridid," says Van Roy.

Beast of the deep

One formation contained the splayed-out, headless body of a beast more than a metre long â nearly twice as large as any of its Cambrian brethren â and more than three times the size of even the largest of the other fossilized species from the same rocks.

None of those other hard-bodied fossils from Fezouata showed the tell-tale marks of an attack from an anomalocaridid's strange mouth, so Van Roy thinks that the one-metre monsters probably hunted soft-bodied invertebrates. Their victims may have been ensnared by the anomalocaridid's giant appendages and then delivered to its mouth.

Jan BergstrÃ¶m, a palaeontologist at the Swedish Museum of Natural History in Stockholm, says that the presence of anomalocaridids in the Ordovician is "surprising news".

Allison Daley, a palaeontologist at the Natural History Museum in London, says that it is difficult to know what caused the extinction of anomalocaridids, but she is still willing to pin the blame on competition from other marine predators, albeit later ones than had been thought â such as cephalopods that emerged during the Ordovician.

The giant bodies of the Fezouata anomalocaridids, Daley speculates, could be the result of an ecological arms race with the emerging predators â one that the Cambrian-era monsters lost. "I doubt there was a period of happy coexistence between the anomalocaridids and newly evolving Ordovician predators," she says.