This is a printer version of an UnderwaterTimes.com article.
To view the article online, visit: http://www.underwatertimes.com/news.php?article_id=83260471095 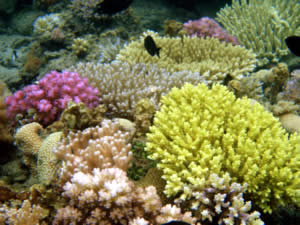 PHUKET, Thailand -- The Wildlife Conservation Society announced today a study showing that some coral reefs off East Africa are unusually resilient to climate change due to improved fisheries management and a combination of geophysical factors. WCS announced the results of the study at the International Coral Reef Initiative (ICRI), which is meeting this week in Phuket, Thailand.

The study, published in the online journal Aquatic Conservation: Marine and Freshwater Ecosystems, provides additional evidence that globally important “super reefs” exist in the triangle from Northern Madagascar across to northern Mozambique to southern Kenya and, thus, should be a high priority for future conservation action.

The study found that Tanzania’s corals recovered rapidly from the 1998 bleaching event that had wiped out up to 45 percent of the region’s corals. Along with monitoring Tanzania’s reefs, WCS helps coral conservation in this region through training of park staff in protected areas.

The authors attribute the recovery of Tanzania’s coral reefs due in part to direct management measures, including closures to commercial fishing. Areas with fishery closures contained an abundance of fish that feed on algae that can otherwise smother corals, while the few sites without any specific management measures remain degraded; one site had experienced a population explosion of sea urchins—pests that feeds on corals.

The findings also showed that the structure of the reefs played a major factor in their resiliency. Tanzania’s reefs are particularly complex and experience unusual variations in current and water temperature. These factors allow for greater survivorship of a higher diversity of coral species, including those that can quickly re-colonize after bleaching.

“Northern Tanzania’s reefs have exhibited considerable resilience and in some cases improvements in reef conditions despite heavy pressure from climate change impacts and overfishing,” noted Wildlife Conservation Society scientist Dr. Tim McClanahan, the study’s lead author. “This gives cause for considerably more optimism that developing countries, such as Tanzania, can effectively manage their reefs in the face of climate change.”

The authors suggest that reefs in Tanzania and elsewhere that exhibit similar environmental conditions have the ability to recover from large-scale climatic and human disturbances. They may, therefore, be a priority for conservation under predicted climate change scenarios where many reefs are expected to suffer further degradation.

The International Coral Reef Initiative (ICRI) is a global partnership among governments and organizations working to stop and reverse the degradation of coral reefs and related ecosystems. This ICRI General Meeting was convened by the joint Mexico - United States Secretariat. WCS is an institutional partner to ICRI.

From Fiji to Glover’s Reef, the Western Indian Ocean Marine Science Association (WIOMSA) and The Tiffany & Co. Foundation have provided generous support for Dr. McClanahan’s research, which examines the ecology, fisheries, climate change effects, and management of coral reefs at key sites throughout the world.

The Wildlife Conservation Society saves wildlife and wild places worldwide. We do so through science, global conservation, education and the management of the world's largest system of urban wildlife parks, led by the flagship Bronx Zoo.

Together these activities change attitudes towards nature and help people imagine wildlife and humans living in harmony. WCS is committed to this mission because it is essential to the integrity of life on Earth. Visit: www.wcs.org