This is a printer version of an UnderwaterTimes.com article.
To view the article online, visit: http://www.underwatertimes.com/news.php?article_id=82751019036 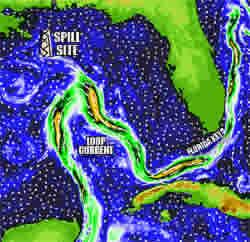 "The results of those tests conclusively show that the tar balls collected from Florida Keys beaches do not match the type of oil from the Deepwater Horizon oil spill in the Gulf of Mexico," according to a Coast Guard-issued news release. "The source of the tar balls remains unknown at this time."

On Tuesday, much of the media reporting concluded that the tar balls were from the Gulf oil spill, despite the fact that the Coast Guard had not confirmed their source.

It is not unusual to find tar balls in Keys waters or on area beaches. The Keys are located along a busy commercial shipping route, with some 8,000 vessels passing by annually, and commercial vessels sometimes discharge bilge water that contains oil. Tar balls can drift into Keys waters from other areas, not just the northern Gulf region.

Meanwhile, as of late Tuesday satellite imagery indicated the bulk of the oil remains dozens of miles away from the Loop Current, but a tendril of light oil appears to have been transported within close proximity to the current. The National Oceanic and Atmospheric Administration is conducting aerial observations to ascertain whether the oil actually has entered the Loop Current.

In the time it would take for oil to travel to the vicinity of the Loop Current, it would be highly weathered and the natural processes of evaporation and dispersion would reduce the oil volume significantly, NOAA said.