This is a printer version of an UnderwaterTimes.com article.
To view the article online, visit: http://www.underwatertimes.com/news.php?article_id=81506973104 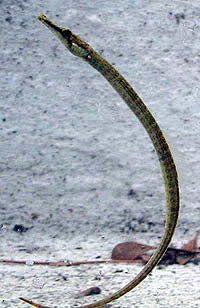 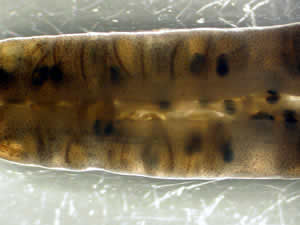 Pregnant male brood pouch 10 days into gestation. The embryos are visible through the pouch folds.

EAST LANSING, Michigan -- A bit of genetic archaeology is giving clues to one of the greatest gender bending mysteries in the world of fish: How did a family of fish come to embrace male pregnancy?

A new gene discovered in the gulf pipefish hints that an old gene busy with kidney and liver function may have learned new tricks in the male womb, said April Harlin-Cognato, assistant professor of zoology and fisheries and wildlife at Michigan State University, in Monday’s edition of the Proceedings of the National Academy of Sciences.

“We’re interested in the evolution of novelty and how novel traits evolve,” Harlin-Cognato said. “Why is this the only group of fish that exhibits male pregnancy? It’s one of the more difficult phenomena to explain in evolutionary biology, and we’re wondering if it’s a matter of old genes gaining new tricks.”

Gulf pipefish are a member of the same fish family as seahorses – in fact they look like sea horses without the curved tails. Like seahorses, it is the male fish that accepts eggs from female pipefish, fertilizes them and carries them in a pouch. The brood pouch has evolved into a complex organ able to nurture and protect the eggs. One of its functions is to regulate the saline content in the womb of these saltwater fish, according to Harlin-Cognato.

Harlin-Cognato conducted the National Science Foundation-funded research at Texas A&M University in collaboration with Eric Hoffman, University of Central Florida, and Adam Jones, Texas A&M University. They found a new type of gene that codes for a protein called an astacin – a family of proteins which perform a variety of functions in bony fish. Through the course of evolution, some genes are copied. The new copies can take on different functions while the original copy continues to perform the original functions.

The hypothesis is that this new gene, which Harlin-Cognato and colleagues dubbed “patristacin” in deference to its suspected fatherly functions, is not a copy. She explains that genes like this get a second job. They suspect that patristacin in its early days, possibly thousands of years ago, was just a gene likely assisting in kidney and liver function. Researchers think it’s possible that the gene was drafted into an after-hours gig working on supporting the then-newfangled male brood pouch.

Patristacin is found in the brood pouch of pipefish and seahorses and in the kidney and liver of bony fish.

“We think it was a new job for an old gene – genetic moonlighting, so to speak. At this point we know the gene codes for a protein in the brood pouch during male pregnancy, but we don’t know yet what it is doing in the brood pouch. It’s a whole new ball of wax to understand how this gene functions in its new job,” Harlin-Cognato said.

Harlin-Cognato has joined MSU’s Ecology, Evolutionary Biology and Behavior Program. Her research seeks to illuminate how variations in genes and morphology arise over generations.

“The genes show you ancestry,” she said. “They show you the overall family tree and can tell you when things took place during the evolution of a new structure.From this family tree we can make educated guesses about the structure and function of these proteins. We’re looking at the endpoint and trying to reconstruct its origin. It’s like doing genetic archaeology.”