This is a printer version of an UnderwaterTimes.com article.
To view the article online, visit: http://www.underwatertimes.com/news.php?article_id=81264791030 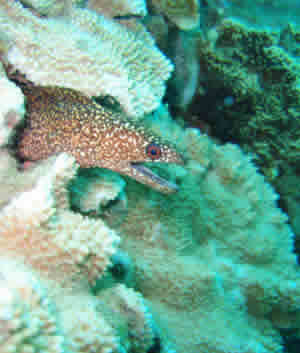 This is a small moray eel in the Hawaiian Islands Humpback Whale National Marine Sanctuary off the coast of Maui. credit NOAA

SILVER SPRING, Maryland -- A peer-reviewed study commissioned by NOAA shows the American people assign an estimated total economic value of $33.57 billion for the coral reefs of the main Hawaiian Islands.

"The study shows that people from across the United States treasure Hawaii's coral reefs, even though many never get to visit them," said Jane Lubchenco, Ph.D., under secretary of commerce for oceans and atmosphere and NOAA administrator. "It illustrates the economic value of coral reefs to all Americans, and how important it is to conserve these ecosystems for future generations."

"We are pleased that research is being done to look at the value of Hawaii's coral reefs, but before we consider any potential applications of the study we will consult closely with local communities," said William J. Aila, Jr., chairperson of the Hawaii Department of Land and Natural Resources.

The study employed a scientifically developed national Internet survey of more than 3,200 households â a representative sample of all U.S. residents, not just Hawaii or coastal residents. From June through October 2009, the survey allowed the public to express its preferences and values for protection and restoration of the coral reef ecosystems around the main Hawaiian Islands. In this study, total economic value includes so-called passive use values, such as the willingness to pay to protect the coral reef ecosystem for future generations, as well as direct use values, such as snorkeling over a coral reef or consuming fish supported by coral reef ecosystems.

A panel of independent university and private scientists, from both Hawaii and the continental U.S., provided facts to the survey design team about the Hawaiian coral reef ecosystems and provided estimates of how the coral reef ecosystems would change in response to the two possible management options. The descriptions, including illustrations, of improvement to coral ecosystems gave survey respondents a clear understanding of what they were being asked to value and how the ecosystems would change as a result of the protection measures.

To estimate underlying values the public places on coral reef ecosystems, the study team presented survey participants with two specific measures to protect and restore coral reef ecosystems. One measure aimed at reducing effects to coral ecosystems from fishing, and another to repair reefs damaged by ships.

The main Hawaiian Islands consist of eight volcanic islands that range in age from active lava flows on the east side of the Big Island to seven million-year-old Kauai. Despite their economic significance, reefs near urbanized areas, such as Honolulu, Wailuku, and Kahului, have experienced increasing stress from ever-increasing population and other pressures.

The national survey was funded by NOAA and the National Science Foundation, and was designed to address the issue of Internet bias. The survey was conducted through two Internet panels; one recruited participants using controlled random digit dialing telephone surveys and the other using standard U.S. Bureau of the Census methods of randomly selecting households and going to each household to recruit participants via face-to-face interviewing.

NOAA will use this study to provide a reliable estimate of the value of the coral reef ecosystem around the main Hawaiian Islands. It also demonstrates that coral reefs provide valuable ecological services for U.S. residents, regardless of whether they actually use them.