This is a printer version of an UnderwaterTimes.com article.
To view the article online, visit: http://www.underwatertimes.com/news.php?article_id=81002314576 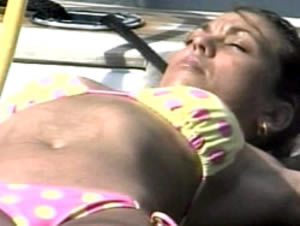 FORT MYERS, Florida -- Gil and Kathi Coombes have run charter boats for years, but it wasn't until January that their business really to took off.

"They will serve drinks and food and sandwiches and run out the baits and lines and do everything a regular mate would do," says Kathi Coombes, "But they're just in a bikini."

Their Ft. Pierce, Florida company, Smokin 'em Charters, features bikini-clad deck mates who, for an extra fee, will drop their tops entirely once they get a few miles off shore.

Gil and Kathi say adding the bikinis has opened them up to bachelor parties and other group outings, keeping them booked solid 4 or 5 days a week.

The Smokin 'em Charter boat moved in to the Ft. Pierce city marina at the beginning of March, but it didn't last long. Not once its brochures advertising topless charters started showing up at the city's Tiki Bar restaurant.

In less than a month, marina manager Dean Kubitschek kicked the business out of the city docks.

"There's a lot of family events here. We can't have brochures with nudity or anything else having to do with it. We can't have it on city property," says Kubitschek.

But the Coombes claim discrimination.

Since the Coombes were told to leave the city marina, they've moved to a private dock, the Harbortown Marina, where they say they don't get the same steady stream of business.

They promise a fight to bring their bikni charter back to the city marina.

Kathi Coombes says she's consulted an attorney. She's also circulating a petition to drum up support for her business.

She claims to have collected 200 signatures, which she plans to submit to the Ft. Pierce mayor and city commission.