This is a printer version of an UnderwaterTimes.com article.
To view the article online, visit: http://www.underwatertimes.com/news.php?article_id=79011058634 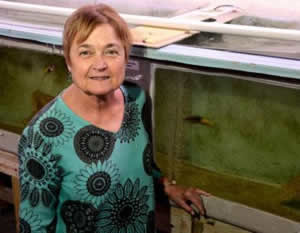 Dr. Joan Holt has helped launch a movement to change the way that fish are raised and sold for saltwater fish tanks. Credit: Scott Holt 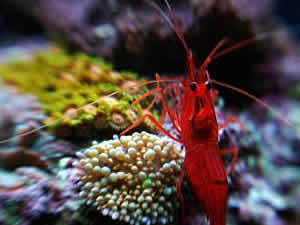 The peppermint shrimp is one of seven marine ornamental species that Joan Holt has successfully bred in captivity. Credit: Paul J. Thompson. 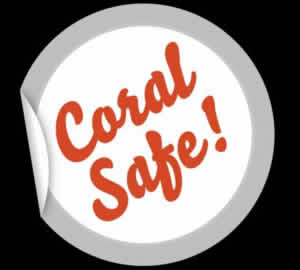 AUSTIN, Texas -- Marine biologists at The University of Texas at Austin Marine Science Institute are developing means to efficiently breed saltwater aquarium fish, seahorses, plankton and invertebrates in captivity in order to preserve the biologically rich ecosystems of the world's coral reefs.

These scientists believe their efforts, and those of colleagues around the world, could help shift much of the $1 billion marine ornamental industry toward entrepreneurs who are working sustainably to raise fish for the aquarium trade.

"It's the kind of thing that could transform the industry in the way that the idea of 'organic' has changed the way people grow and buy fruits and vegetables," says Joan Holt, professor and associate chair of marine science at The University of Texas at Austin. "We want enthusiasts to be able to stock their saltwater tanks with sustainably-raised, coral-safe species."

Holt is a co-author of a recent article, "Advances in Breeding and Rearing Marine Ornamentals," published in the Journal of the World Aquaculture Society in April.

The paper is a complement to Holt's broad-ranging work over the past 10 years to promote captive breeding of ornamentals. She's been a pioneer in developing food sources and tank designs that enable fragile larvae to survive to adulthood.

Holt has also been a vocal critic of the extraordinarily wasteful methods currently used to bring sea creatures from the oceans to the tanks.

"One popular method is to use a cyanide solution," says Holt. "It's squirted into the holes and crevices of the reef and it anesthetizes the fish. They float to the surface. Then the collectors can just scoop them up, and the ones that wake up are shipped out."

This method, says Holt, has a number of unfortunate effects. It bleaches the coral. It kills or harms other species that make the coral their home, particularly those that can't swim away from the cyanide. It can deplete or distort the native populations of the species. And it contributes to 80 percent of traded animals dying before ever reaching a tank.

Unlike the freshwater ornamental market, which relies mostly on fish raised in captivity, the saltwater ornamental market is 99.9 percent wild caught. Holt says this is largely because there's less accumulated knowledge on breeding saltwater fish in captivity. Saltwater species also tend to spawn smaller, less robust larvae, which are harder to rear to maturity, and to rely on various foods, such as plankton, that are not readily available in mass quantities for breeders.

Yet all these difficulties, says Holt, are surmountable.

She and her colleagues in Port Aransas, where the Marine Science Institute is located, have successfully bred in captivity seven species of fish, seahorses and shrimp they've caught from the Gulf of Mexico and the Caribbean, including species that other biologists had tried but failed to rear before. Others have successfully bred popular species like clownfish, gobies, dottybacks, and dragonets, as well as coral, clams, invertebrates, and algae.

Several big aquariums, including SeaWorld, have committed to assisting in the breeding and egg collection effort, and to integrating into their exhibits information about how the aquarium trade impacts the coral reefs.

Holt and her colleagues envision, ultimately, is a "coral-safe" movement. The science, the economics and the social awareness could together result in a sea change in how saltwater aquariums are populated and how saltwater tank enthusiasts think of themselves and their passion.

As more tank-raised ornamentals percolate into the market, Holt believes people will see another advantage to buying sustainably. The fish will simply do better. They'll live longer, be healthier and be easier to care for.

"Species that are bred in captivity should adapt much better to your tank than something that was just caught halfway across the world, in a different system," says Holt. "Good retailers will want to sell these species, and consumers will benefit from buying them."