This is a printer version of an UnderwaterTimes.com article.
To view the article online, visit: http://www.underwatertimes.com/news.php?article_id=78034961052 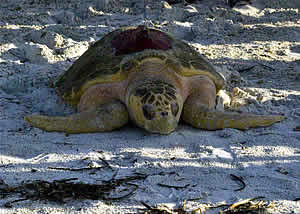 Vicki Lee on the beach before she swims away. Credit: Kelly Ireland, Mote Marine Laboratory 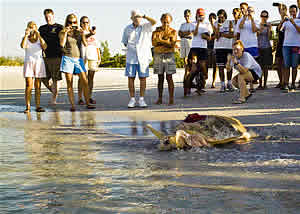 SARASOTA, Florida -- "Vicki Lee," a loggerhead sea turtle first tagged 21 years ago by Mote Marine Laboratory scientists as she nested on Casey Key, returned to the Gulf of Mexico last Friday morning after more than 160 days in rehabilitation.

The sea turtle returned to sea wearing a satellite transmitter that Mote researchers hope will track her ocean travels for the next six months to a year.

In April, Vicki Lee was found stranded in Naples, where a rescue team from Florida's Fish and Wildlife Conservation Commission initially identified her through a microchip that Mote staff tagged her with in 2003. When she arrived at Mote for treatment, staff then found a metal tag placed on one of her flippers the first time she was ever tagged in 1988.

All told, Vicki Lee has been seen 12 times by Mote staff and tagged four times before her hospital admission this year:

On Friday morning she was tagged again - this time with a high-tech satellite transmitter - that will allow Dr. Tony Tucker to follow her in the water. "It's incredibly important to know about both her life on the nesting beach - the maternity ward - and learn about what she does after leaving the beach," Tucker, manager of Mote's Sea Turtle Conservation and Research Program, told the crowd gathered on the beach for Vicki Lee's release.

Tucker attached the satellite tag to Vicki Lee's shell with epoxy and coated the area with paint designed to keep barnacles and algae from growing on it. Now that Vicki Lee has returned to the ocean, the satellite tag will begin transmitting her location back to Tucker in the lab. The public can also follow her on her travels at www.seaturtle.org/tracking (scroll to "Mote Marine Laboratory - Sea Turtle Rehabilitation Hospital" on the left) and watch this chapter of her life unfold.