This is a printer version of an UnderwaterTimes.com article.
To view the article online, visit: http://www.underwatertimes.com/news.php?article_id=76930125810 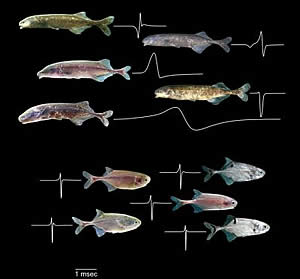 The top group of fish have more complex signal processing ability than the bottom group.

ST. LOUIS, Missouri -- Bruce Carlson stands next to a fish tank in his lab, holding a putty colored Radio Shack amplifier connected to two wires whose insulation has been stripped. At the bottom of the tank a nondescript little fish lurks in a sawed-off section of PVC pipe. Carlson sticks the two bare wires into the tank. Suddenly we hear a rapid-fire pop, pop, pop, pop, pop, pop. The pops, which are surprisingly loud, sound rather like the static on an old-fashioned tube radio tuned between stations.

"When there are many fish in a tank," Carlson says, "it sounds like a frying pan".

Carlson, PhD, assistant professor of biology in Arts & Sciences, is studying the African family of weakly electric fishes called the Mormyridae, or mormyrids.

Each fish in this family has an electric signal distinctive to its species, but also, to its sex, dominance status and even its individual identity.

The shape of the discharge is the fish's "face," says Carlson. "It's how they recognize one another."

The sensory pathway that detects and analyzes the electric discharges in the Mormyridae had been well studied, but only in two or three species, Carlson says, and the family has more than 200. Given its diversity Carlson asked whether changes in electrical communication might have influenced rates of speciation.

Three anatomical advances underlie the ability to send and receive diverse electrical signals: cells able to produce different discharges, a global distribution of the sensors that detect the discharges' shape, and a more complex signal-processing area of the brain to analyze them.

In 2008 the National Science Foundation awarded Carlson a grant to travel to Gabon (where many mormyrid species are found) to study the mormyrid brain, and how brain anatomy maps onto the evolutionary tree of the fishes.

His team found that changes in brain anatomy and the resulting ability to fully exploit electric signal space did indeed lead to rapid speciation, a result published in the April 29 issue of Science.

Each pop is one discharge of an electric organ located at the base of a fish's tail. The organs consist of stacks of disk-like cells called electrocytes, "pretty much like watch batteries in series," says Carlson.

"These signals don't propagate as electromagnetic waves," Carlson explains. "Instead they exist as an electrostatic field, just like you'd get by sticking a battery in the water.

"That's why these fish are so good at recognizing pulses with different shapes," he says. Waves are distorted during transmission, so that their fine temporal structure is smeared.

"The discharges are not distorted. They get weaker with distance, but their temporal structure stays the same. That's one reason mormyrids evolved to be exquisitely sensitive to small timing differences in electric signals," Carlson explains.

Weakly electric fish have several types of electroreceptors but the ones important for communication are called knollenorgans, from the German word "Knolle," or tuber, because they consist of bulbous cells buried just under the fish's skin.

The knollenorgans respond to a voltage rise, firing a time-locked spike in response to outside positive-going voltage changes.

The spike time comparison occurs within the central nervous system, in a part of the brain called the extero-lateral nucleus, or EL.

When we began our work, the "standard anatomy" for the "mormyrid" brainâwhat you'd find if you looked in a textbook-- says Carlson, was a two-part EL, with separate nuclei, or clumps of cells, in the anterior and posterior portions.

"In addition to the standard anatomy, we were amazed to see another anatomy, where the EL is substantially smaller and not split into two portions.

"All the fish we looked at either had the large EL that was divided into anterior and posterior halves, or they had the small undifferentiated EL.

Working with collaborator Matthew Arnegard, PhD, a postdoctoral fellow at the Fred Hutchinson Cancer Research Center in Seattle, WA, the scientists mapped the brain anatomy onto a phylogenetic tree (an evolutionary tree based on the similarity of DNA sequences), and they could see that there were two equally parsimonious ways to reconstruct the fishes' evolutionary history.

If a communication system is to promote species diversity it must have both the capacity to create new signals (flexible stalk morphology) and the ability to distinguish those new signals from other signals (the broad distribution of knollenorgans and the complex brain).

"The only fish that have all three is a group of mormyrids we ended up calling Clade A for simplicity's sake," Carlson says.

"Statistical analysis showed us that the rate of signal divergence in Clade A was 10 times higher than among other fish within the Mormyridae," Carlson says. Further analysis by collaborator Luke Harmon, PhD, assistant professor of biology at the University of Idaho, revealed that the number of species in clade A has been increasing three to five times faster than the number of species in other mormyrid lineages.

In other words, the fancier the fishs' communication kit, the more likely it was to come up with new electric discharges and new species that identified one another by those discharges.

Putting it to the test

It all worked out statistically and logically but was it what the fish actually experienced?

"After all," says Carlson, "this sensory world is totally foreign to us. I've worked with these fish a long time, so I can tell a few of the discharges apart by ear. But for the most part I need an oscilloscope to see the differences.

Can the Clade A fish tell the difference between discharges? To test them, Carlson ran behavioral playback experiments on fish caught in Gabon.

"A fish would be going pop, pop, pop and we'd pulse it. Depending on the fish, it would either discharge more rapidly, brrrrrrrrr, or stop discharging altogether.

The experiments showed that mormyrid fish in Clade A were able to distinguish among pulses, but other mormyrids (those with the EL brain) were not.

Did the evolution of a fancy signal-processing brain drive speciation in the Mormyridae? "It's always difficult with evolutionary studies to say that any one trait is the cause or the trigger for another," Carlson says. "But in this case we were able to show that the complex signal-processing brain evolved before a burst of speciation, that signal variation was higher among fishes with that brain, and that these fishes could distinguish among subtly different pulses, whereas others could not.

"Together it adds up to a strong case for brain evolution triggering increased diversification."