This is a printer version of an UnderwaterTimes.com article.
To view the article online, visit: http://www.underwatertimes.com/news.php?article_id=76108243195

Bonefish Spawning Locale Discovered -- They Do It Offshore, In The Dark, At High Tide
Underwatertimes.com News Service
May 19, 2011 18:27 EST 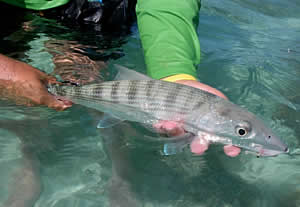 Bonefish caught by angler, about to be released. credit UMASS Amherst

AMHERST, Massachusetts -- Though bonefish are one of the most sought-after tropical sport fish in the world, drawing thousands of anglers to Caribbean waters every season, until recently the only information scientists had about their spawning habits were anecdotes and fish tales.

Now, University of Massachusetts Amherst researcher Andy Danylchuk and colleagues from several other institutions know far more about bonefish spawning habits after using ultrasonic transmitters to tag and track bonefish movements off Eleuthera in the Bahamas. Their results appear in an early online issue of the journal Marine Biology. Results should help focus habitat conservation efforts.

It has been estimated that 30 percent of anglers who visit the Bahamas to cast for bonefish come from New England.

What Danylchuk and colleagues found by tagging these popular sport fish is that bonefish gather in schools of over 1,000 at pre-spawning aggregation sites for a few days twice a month from October to May, primarily around the new and full moon. At dusk, these large schools begin to move offshore to the edge of deep abyssal waters, over 1,000 feet deep, very unlike the shallow flats were anglers normally encounter them. There, as night falls, the fish spawn under cover of darkness.

"This is the first time movement patterns of bonefish to deep water have been formally described," says Danylchuk, an expert on coastal fish stocks, the impact of angling and how to protect ecosystems. Although surprising, this movement to spawn in deeper water makes some sense, he adds. "One possible benefit of bonefish migrating to offshore locations to spawn is that it increases the dispersal of their fertilized eggs, especially with the high tides that happen with the new and full moons."

Danylchuk and colleagues tagged 30 bonefish over two years, 60 in all, following them along with a few individuals previously tagged, from 2007 to 2009. Another first for this research team was observing behaviors such as porpoising, that is groups of fish leaping part-way out of the water as they travel along, they believe are likely associated with bonefish courtship. Danylchuk was amazed to see these usually bottom-hugging fish breaking the surface as they moved away from their nearshore aggregation sites.

"This new understanding of bonefish movement and spawning aggregations has significant implications for their conservation," he says, because it establishes that pre-spawning aggregation sites identified in this study were located in transition areas between shallow coastal habitats and deep oceanic waters, the very same places that humans find desirable for marinas and tourism development.

"Knowing that bonefish are not residents of shallow flats alone means that pre-spawning aggregation sites and deeper reef habitats also need to be protected to ensure sustainable bonefish populations," he says.

Danylchuk is familiar to many as a result of several appearances on the ESPN2 network series, "Pirates of the Flats." This research was supported by the Bonefish and Tarpon Trust, the Patagonia World Trout Initiative, the Cape Eleuthera Institute and a number of private donors.