This is a printer version of an UnderwaterTimes.com article.
To view the article online, visit: http://www.underwatertimes.com/news.php?article_id=75821004931

Fish Study Turns Color Vision Theory Inside Out; 'The Males Have To Make Themselves Stand Out'
Underwatertimes.com News Service
June 22, 2010 23:28 EST 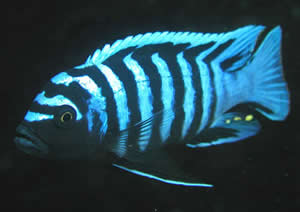 ST. LUCIA, Queensland -- Neurobiologists at the Queensland Brain Institute have found that animals are not always as brightly colored as they seem â at least not to their counterparts.

Researchers have delved deep inside the eye of the brightly colored cichlid fish â which many people would recognize from their aquariums at home â to observe its vision from the inside out. In doing so they have found the animals are camouflaged to other cichlids.

"When you compare humans to many of the animals who are using color we are comparatively color blind," researcher Professor Justin Marshall said.

The research, which features on the cover of the latest edition of the Journal of Experimental Biology, focused on cichlids in Lake Malawi in southern Africa. Scientists found cichlids could see ultra-violet colors, making their sight much better than that of humans, who can only see the basic red, green and blue spectrums.

"The males have to make themselves stand out. It's definitely worth it because it shows the female they are fit and healthy," Professor Marshall said.

Further, the neurobiologist said cichlids provided a fascinating research model for scientists, as they had evolved very quickly over the last million years.

"Understanding the eyes and the way in which they're put together and what advantage they give to the animal's sensory systems is very important for future discoveries," Professor Marshall said.