This is a printer version of an UnderwaterTimes.com article.
To view the article online, visit: http://www.underwatertimes.com/news.php?article_id=74961038210 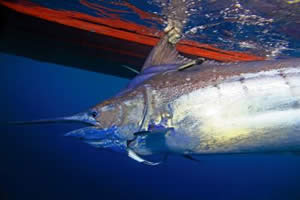 This is a blue marlin with a satellite tag used to monitor horizontal and vertical habitat use in a new study. Credit: B. Boyce

MIAMI, Florida -- he science behind counting fish in the ocean to measure their abundance has never been simple. A new scientific paper in Nature Climate Change shows that expanding 'ocean dead zones' (areas of low oxygen) driven in part by climate change makes that science even more complex.

Blue marlin, other billfish and tropical tuna are high energy fish that need large amounts of dissolved oxygen. Scientists from the disciplines of oceanography and fisheries biology are sounding an alarm that the expansion of dead zones is shrinking the useable habitat for these highly valuable pelagic fish in the tropical northeast Atlantic Ocean. And as dead zones shrink habitat by depriving fish of areas with enough dissolved oxygen for them to thrive, they squeeze these species into surface waters where they are more vulnerable to fishing.

"The shrinking of habitat due to expanding hypoxic zones needs to be taken into account in scientific stock assessments and management decisions for tropical pelagic billfish and tuna," said Dr. Eric Prince, fisheries scientist and principal investigator representing NOAA's Southeast Fisheries Science Center on the project. "Without taking it into account, stock assessments could be providing false signals that stocks are healthy, when in fact they are not, thus allowing overfishing that further depletes these fish stocks and threatens the sustainability of these fisheries."

The data on blue marlin, one of the most valuable and storied fish on the planet, were collected using pop up satellite tracking devices. These devices recorded the horizontal and vertical movement of these fish. The information on fish movement was then compared to detailed oceanographic maps of the same ocean areas showing the location of low-dissolved oxygen zones. By comparing the movement of the blue marlins and the location of low-oxygen areas, the study shows that blue marlin ventured deeper when dissolved oxygen levels are higher and remain in shallower surface waters when low dissolved oxygen areas encroach on their habitat from below, squeezing them into surface waters.

"We found that the blue marlin's habitat is being compressed, while the threats from human activity are increasing. In human terms, you might describe it as if you were in a house on fire with all of the doors and windows were locked, leaving only one exit, then discovering you have a robber inside the house at the same time," said Dr. Jiangang Luo, scientist at the University of Miami's Rosenstiel School of Marine & Atmospheric Science, who processed and analyzed the popup satellite tagging data for the research team.

"Working closely with oceanographers, we are getting a much clearer picture of how climate-driven dead zones are shrinking the habitat for some of the world's most valuable fish. The alarming picture painted by this study will hopefully inform our management decisions, improving the long-term health of blue marlin and other billfish and tropical tuna fisheries in the central Atlantic," said Luo.

The oceanographic data were collected and analyzed by co-author Lothar Stramma and colleagues at the Leibniz Institute of Marine Science in Kiel, Germany.

While the new paper focuses on the tropical northeast Atlantic Ocean in the waters off West Africa, the expansion of low-oxygen zones is occurring in all tropical ocean basins and throughout the subarctic Pacific, making the compression of habitat a global issue. The problem for pelagic fishes in the tropical Atlantic is particularly acute, the authors note, because many of these fish species and the unintended catch, called bycatch, are already fully exploited or overfished.