This is a printer version of an UnderwaterTimes.com article.
To view the article online, visit: http://www.underwatertimes.com/news.php?article_id=74685102310 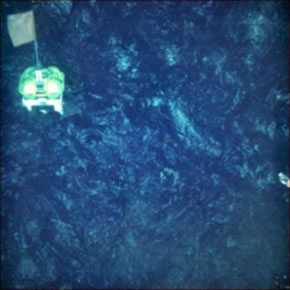 One of the ocean bottom seismometers trapped in fresh lava on the East Pacific Rise.

NEW YORK, New York -- Ordinarily, losing almost all of one's instruments would be considered a severe setback to any scientist. But when Maya Tolstoy, a marine geophysicist at the Lamont-Doherty Earth Observatory, a member of the Earth Institute at Columbia University, recently learned that two-thirds of the seismometers she placed on the floor of the Pacific Ocean were trapped more than 8,000 feet (2500 meters) underwater, it turned out to be an extremely good sign.

Tolstoy and Lamont-Doherty colleague Felix Waldhauser set an array of ocean bottom seismometers along a section of the East Pacific Rise off the coast of Mexico in 2003 to study the little-understood process of seafloor spreading--a process that is responsible for the formation of nearly three-quarters of the Earth's crust. When a team went back in April 2006 to retrieve the instruments, however, only four out of 12 responded to the coded release signal and bobbed to the surface; three more responded to the signal, but did not come up. The rest remained silent.

Tests of the water temperature and light-scattering near the sea floor revealed signs of a recent volcanic eruption. A second expedition led by James Cowen of the University of Hawaii on the research vessel R/V New Horizon in early May lowered a camera that confirmed what the scientists suspected: Their instruments had been directly on top of a section of the East Pacific Rise that erupted and were trapped in fresh lava flows.

Instead of bemoaning their fate, the group celebrated their fortune--no one has ever closely recorded the series of micro-earthquakes associated with the formation of new seafloor. Preliminary analysis of their data appears in an upcoming issue of the journal Science and will be released on the Science Express Web site November 23.

"It's amazing that we know so little about something so fundamental to the planet," said Tolstoy. "Even if we don't get the rest of the instruments back we'll have learned quite a bit."

The East Pacific Rise is one of three active seafloor spreading centers targeted by the National Science Foundation's Ridge 2000 program to document the process of crustal formation as it is happening. Ridge 2000 was formed in 2001 as an interdisciplinary effort to study the geology, chemistry and biology of the poorly understood process by which the Earth's crust is formed.

"Discovering new lava so soon after a seafloor eruption is a unique opportunity," said Donna Blackman, current chair of the Ridge 2000 program. "It allows Ridge researchers a rare chance to see how geologic processes affect the deep-sea ecosystems that thrive near hydrothermal vents."

The first underwater eruption was not documented until 1990, even though many probably occur each year, and seismometers on land still cannot detect the many small, distant earthquakes that scientists believe precede a submarine eruption for many months. By comparison, earthquakes often occur only a few days or hours before a land-based volcanic eruption.

Tolstoy found that seismic activity at the site gradually built up for at least two years leading up to the brief, January 2006 eruption that entombed her instruments, raising the possibility that future eruptions may be forecast a year or more in advance.

"Our success emphasizes the importance of real-time monitoring on the seafloor so that next time we'll be collecting many different types of data the moment an eruption starts," said Tolstoy. "That way we can really begin to understand this fundamental building block of our planet, from the mantle to the microbe."